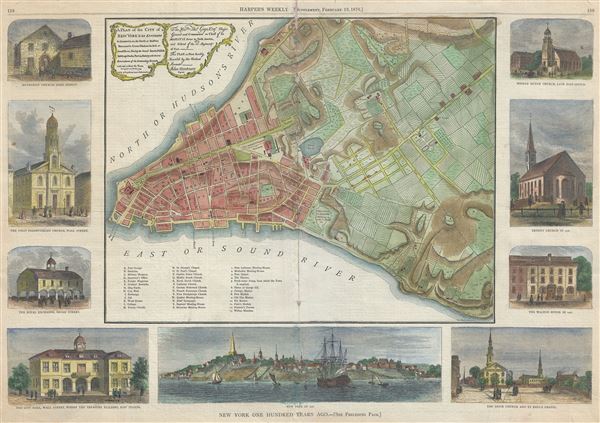 An uncommon 1876 map of New York City issued for Harper's Weekly. Presented surrounded by engraved illustrations of New York City buildings and monuments, this map, based on the map of John Montresor, was drawn to commemorate 100 years of New York history. The map, which was actually first issued in 1775, covers lower Manhattan as it was on even of the American Revolutionary War. Development extended roughly to today's Canal Street. The lands beyond were primarily farmland. Several early estates are noted including John Delancey's estate and N. Bayard's farm. Other estates noted include the Rutgers Estate, the Ackland Estate, G. Harrison's Brewery, the de Peyster estate, and Duyckinck's estate. A Jewish burial ground is identified near the Bowery. The Collect Pond, and its nearby tanneries is identified only as 'Fresh Water.' The proposed Common Square, where City Hall now stands, is also noted. The images surrounding the map proper illustrate important New York Landmarks, including a Methodist Church on John Street, the First Presbyterian Church on Wall Street, the Royal Exchange on Broad Street, City Hall, on Wall Street, Middle Dutch Church, Trinity Church, Walton House and St. Paul's Chapel. A larger view along the bottom of the map illustrated New York Harbor as it would have appeared in 1776. This map was engraved and issued as s Supplement to the February 19, 1876 issue of Harper's Weekly.

Average. Some centerfold damage - see image. Laid down on heavy stock. Priced accordingly.
Looking for a high-resolution scan of this?