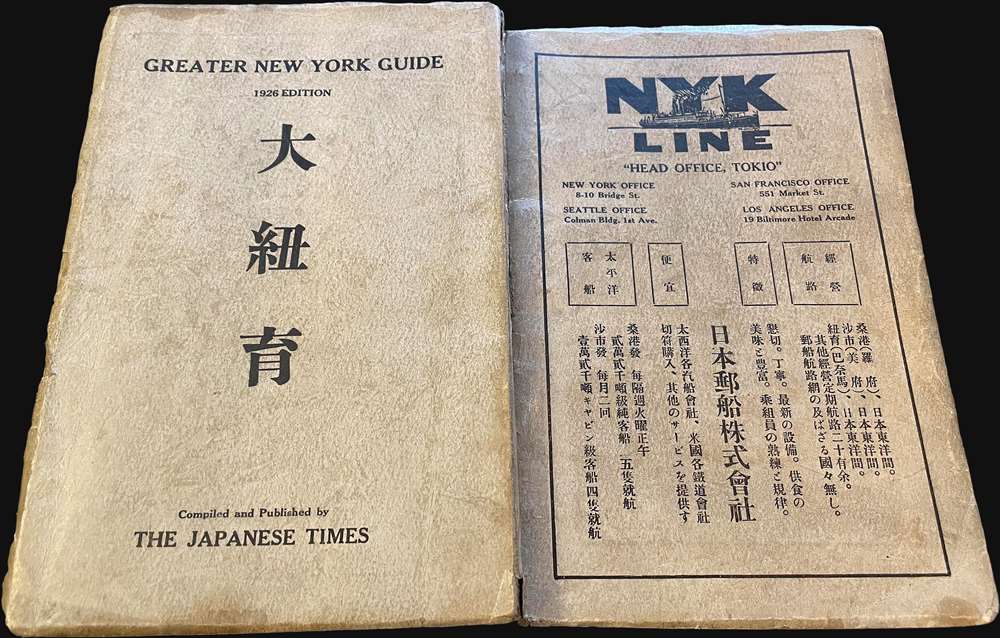 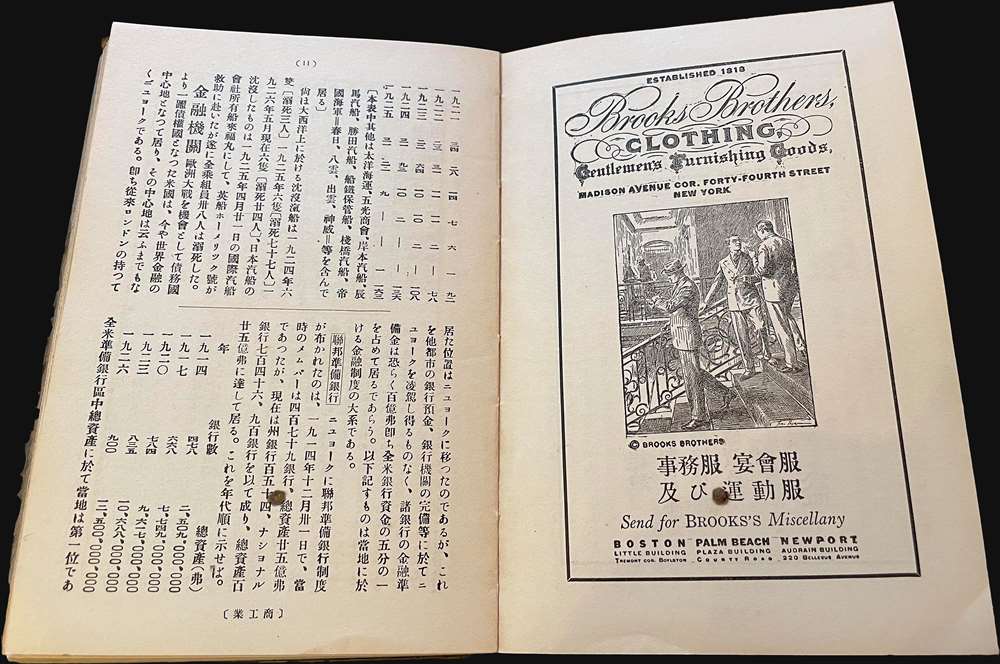 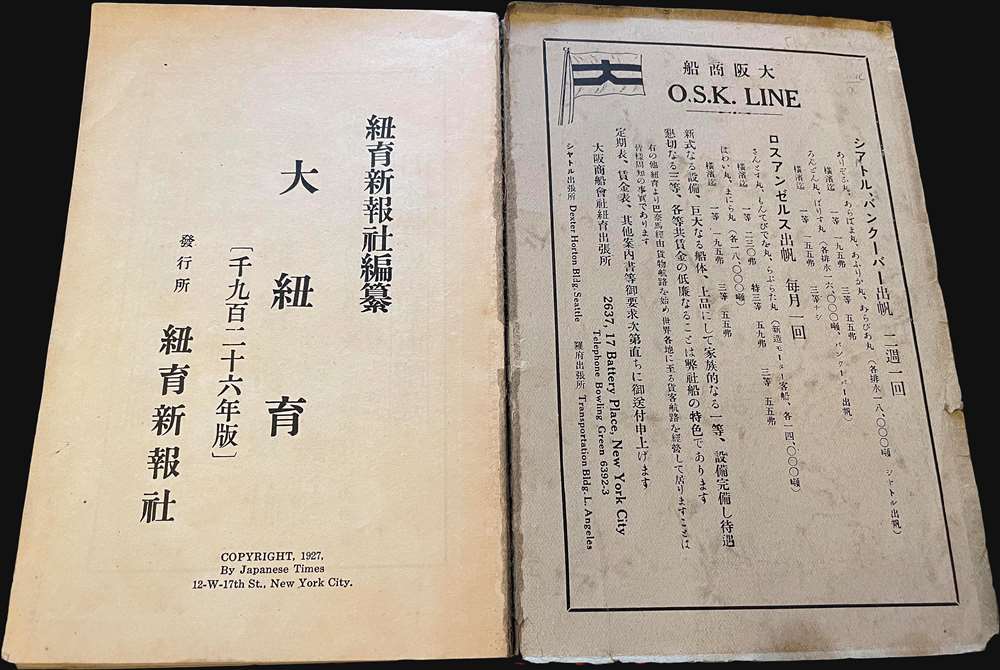 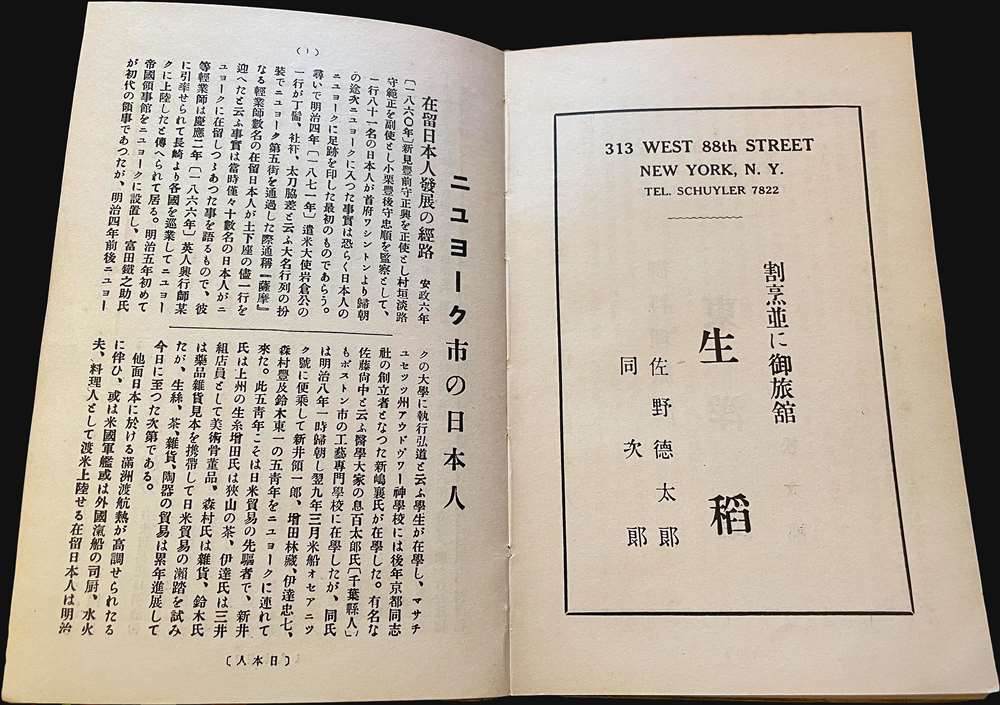 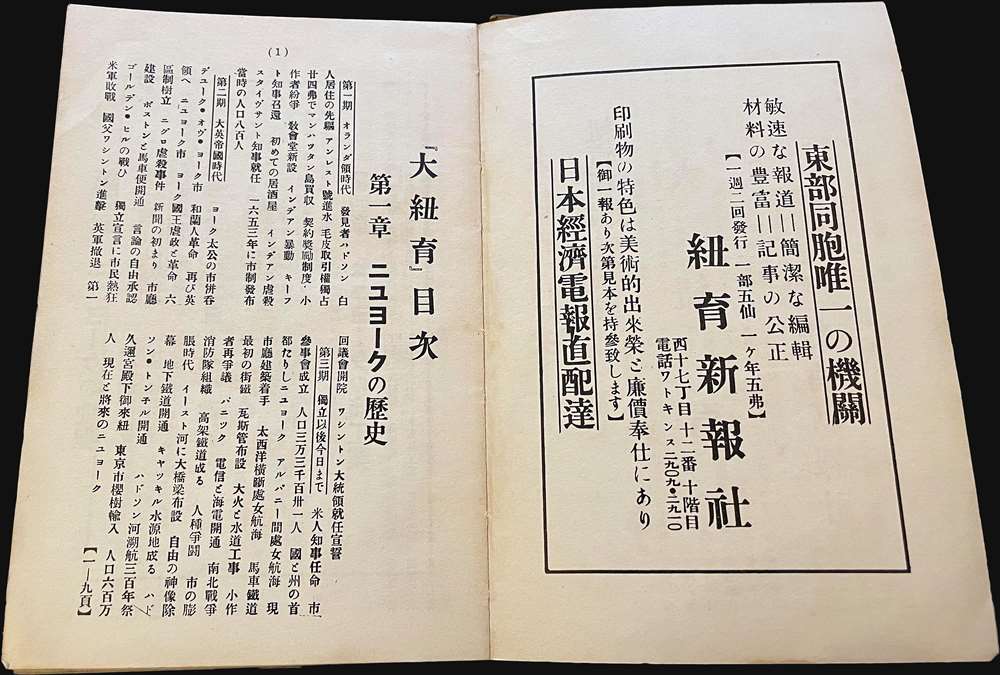 Unique insight into the Japanese travel experience in the United States in the 1920s.
$2,500.00

This is a very rare 1926 Japanese-language guide and map of New York City published by The Japanese Times (紐育新報社), a Japanese-language newspaper in the city. It offers unique insights into the experience of the Japanese traveler in pre-War America. Although the newspaper catered to Japanese Americans living in New York City, the guide was most likely meant for Japanese travelers. The guide is quite extensive, stretching to over 100 pages and discussing the history, politics, demographics, transportation, and cultural attractions of NYC. The presence of a suggested itinerary for a tour of North America, information on other major American cities, and advertisements for Japanese mail and cargo shipping companies with multiple locations in the U.S. all suggest that the guide was meant for Japanese travelers.

This map is surprisingly comprehensive, including and giving equal space to Brooklyn, Queens, and the Bronx as is given to Manhattan, most likely to show the entire subway network. An inset map at bottom-right depicts Lower Manhattan in greater detail. The legend uses a system of kana instead of geometric shapes as symbols to indicate sites marked by black squares. However, not all the black squares have a corresponding kana, and several are simply marked with the kanji for town or neighborhood (町 machi), which likely refers to neighborhoods with Japanese American residents.

This map dates from the latter part of the heyday of elevated trains in Manhattan, running along 2nd, 3rd, 6th, and 9th Avenues. These were taken out of service starting in 1940 as they were considered far inferior to the subway, which was faster, more reliable, cleaner, and carried more passengers.

Places indicated in the legend reflect the readership of the newspaper and potential travelers, consisting largely of businesspeople, professionals, and students. Universities (Columbia, NYU, Fordham, City College), museums, the New York Public Library, and the Metropolitan Opera are included, as well as the Statue of Liberty, the Polo Grounds, and Yankee Stadium (constructed only a few years prior). Curiously absent are important institutions of the Japanese American community in New York, such as the Japan Society, at that time at 25 West 43rd Street, and the Nippon Club at 161 West 93rd Street. This may indicate that the guide was meant for travelers from Japan more so than Japanese Americans living in New York. On the other hand, black squares are present roughly at these locations with the 町 character and perhaps refer to these institutions.

The Japanese population of New York City and the Tri-State Area has traditionally been smaller than on West Coast and Hawaii. Japanese New Yorkers in the 1920s were generally wealthy elites with professional backgrounds, although working-class immigrants did labor in the shipping and restaurant industries at the time this map was made. Unlike other ethnic communities in New York, there has never been a clear and consistent Japantown, although in the pre-World War II period there were pockets of Japanese residents along the west side of Manhattan from Lincoln Square up to Morningside Heights.

The first Japanese immigrants to New York arrived in 1876, but soon afterwards Japanese immigration was tightly restricted and the population of first- and second-generation immigrants (Issei and Nisei) did not exceed 5,000 until the post-World War II period. Still, prominent Japanese Americans in the city aimed to establish institutions to foster community support, in particular the chemist Takamine Jōkichi (高峰譲吉), who helped found both the Nippon Club and the Japan Society. Although Japanese Americans in New York were not interned en masse during the Second World War, they did suffer discrimination and leading members of the community were interned at Ellis Island.

This is the 1926 edition of the Greater New York Guide (大紐育. 1926年版) published by The Japanese Times. This map is not known to be cataloged separately with any institution, and the entire guide is only held by the Library of Congress and the National Diet Library. It is very scarce to the market.

The Japanese Times (紐育新報; 1911 - 1941) was one of two major Japanese-language newspapers published in New York City in the pre-World War II period (the other being 日米時報 Nichi-Bei Jihō). Aside from different coverage of local news, the New York newspapers were somewhat different than West Coast and Hawaii-based Japanese newspapers as the former catered to a readership composed of wealthier professionals, businesspeople, and students while the latter's readership was more often small business owners and laborers. After the Peal Harbor attack, both The Japanese Times and Nichi-Bei Jihō ceased publication under U.S. government pressure. Learn More...