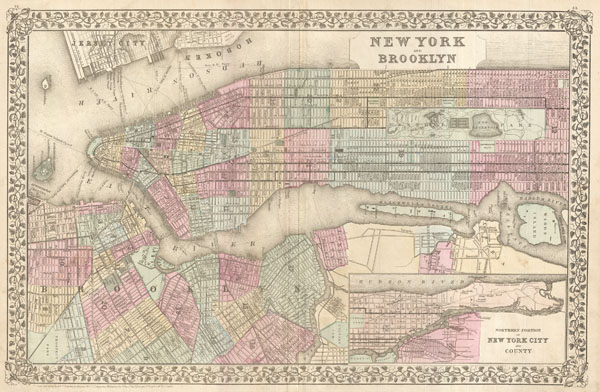 One of the Mitchell plans of New York to show the Brooklyn Bridge.

This beautiful hand colored map is a lithographic engraving of New York City, dating to 1882, by the legendary American map publisher S.A. Mitchell, Junior. Covers all of Manhattan and much of Brooklyn as well as adjacent parts of Jersey City and Queens. Includes in inset map of northern Manhattan and parts of Queens in the lower right quadrant. Superb detail at the street level including the indication of individual buildings. The Brooklyn Bridge, still one year away from its 1883 completion, is indicated. Also names the various ferry routes between New York and Jersey City, as well as between Manhattan and Brooklyn. Central Park shown in its completed state. Dated and copyrighted 'Entered according to Act of Congress in the year 1882 by S. Augustus Mitchell in the Office of the Librarian of Congress at Washington.'

Mitchell Jr., S. A., Mitchell's New General Atlas, containing Maps of the Various Countries of the World Plans of Cities, Etc. Embraced in Ninety-Three Quarto Maps. Forming a series of One Hundred and Forty-Seven Maps and Plans. Together with Valuable Statistical Tables. (Philadelphia) 1882.