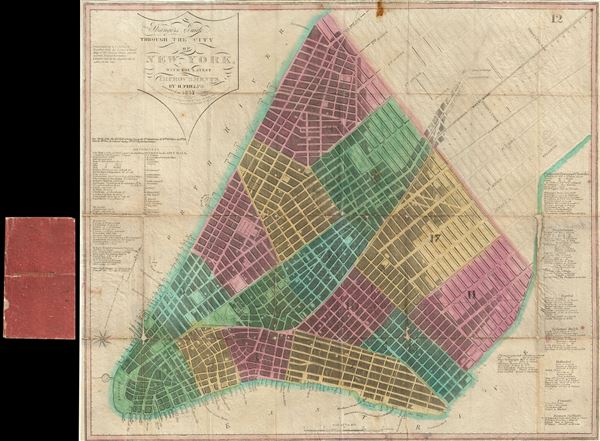 A scarce map of 1837 map New York City issued by Humphrey Phelps. This map details the southern part of Manhattan from the battery to 14th Street, though it technically extends, though with less detail, all the way to 41st street. Phelps identifies all streets, parks, and piers. Numeric tables to the left and right of the map proper also provide reference to public offices, museums, markets, hospitals, and churches. Phelps copyrighted this map in 1830 - though no known examples seem to have survived of the first edition - and it may well be his first published map. Subsequent editions were issued until about 1841, by which time the map had become outdated due to New York's rapid expansion northwards. It is also notably one of the few maps that Phelps produced without a partner. The present edition dates to 1837.

Very good. Some wear and loss on original fold lines - especially a fold intersections. Repaired, flattened, and backed with archival tissue. Removed from but sold with original leather binder.