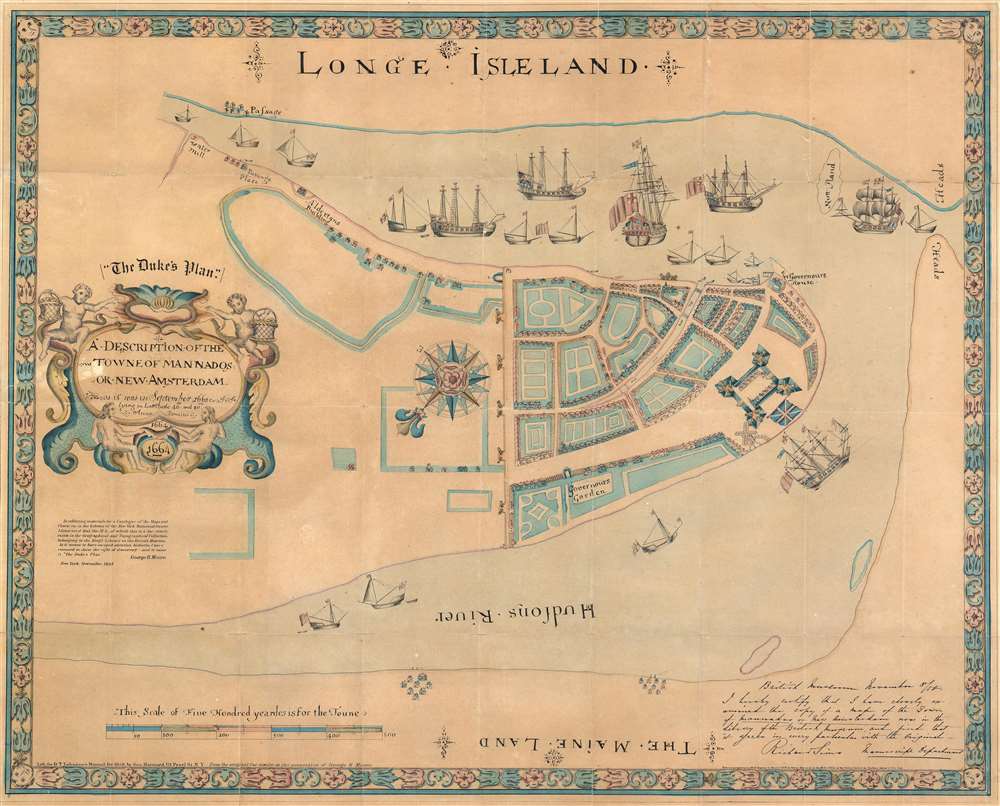 The first published representation of the Duke's Plan of New Amsterdam (New York), 1664.

This is the 1859 Valentine reissue of the magnificent 'Duke's Plan' of New York City. The original Duke's Plan, a fine illustrated manuscript prepared in 1664 currently resides in the British Library in London. The map was discovered in 1858 by George H. Moore, Librarian of the New York Historical Society after being all but forgotten in the stores of the British Library. Thus, this present example, published by Valentine in 1859, represents the first time this plan was revealed to the general public.

A Closer Look at the MapWhere Did This Map Come From? There are Two Competing Theories

Cartographically the map claims to represent the city in the year 1661, well before the 1664 British conquest. Two theories explain this. The first and most plausible suggests that the plan was based upon an earlier unpublished survey compiled during the Dutch period by Jacques Cortelyou - famous in his own right for the 1660 Castello Plan of New Amsterdam. The second, and most exciting, suggests that this map is actually the work of a British spy living in New Amsterdam under the Dutch. There is in fact a manuscript description of the city dating to 1661 that accurately corresponds to this map, however to produce this masterpiece, the rough sketches of the spy must have been reworked by the masters of the Thames School.

The present example of this map was engraved by George Hayward from George H. Moore's manuscript facsimile and issued in the 1859 edition of D. T. Valentine's Manual. It is the first printed depiction of this beautiful and significant plan.