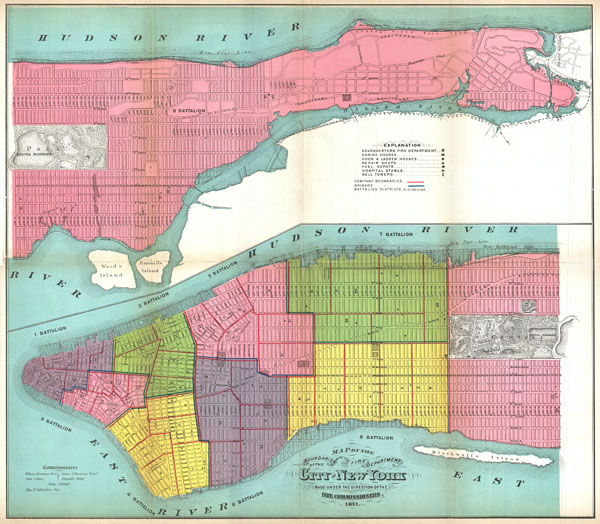 This is large map 1871 map of New York City's fire departments. Covering all of Manhattan, this map defines which fire battalions and brigades are in charge of each area. When Hardy issued this map there were but nine fire battalions in Manhattan. The locations of Fire Departments, Engine Houses, Hook & Ladder Houses, Repair Shops, Fuel Depots, Hospitals, and bell towers are all noted. In addition to Fire Commission information, this map also shows the proposed (and eventually realized) landfills along the Manhattan shorelines. The expansion of the Manhattan shore line eventually lead to the development of FDR Drive, the West Side Highway, and a greatly expanded Riverside Park. This map is brightly colored in pastels to further illustrate the various divisions. All streets are labeled. Published by John Hardy, Clerk of the Common Council, for the 1871 edition of the Manual of the Corporation of New York.

John Hardy (September 19, 1835 - December 9, 1913) was born in Scotland on September 19, 1835. At four he, along with his parents, immigrated to the United States and settled in New York City. There he attended public schools and in 1853 graduated from the College of the City of New York, where he studied law. In 1861 he was admitted to the New York Bar and in the same year took a seat on the New York State Assembly. He later was elected to the Board of Alderman of New York City and held this post, on and off, from 1863 to 1869. In 1870 and again in 1871 he held the position of Clerk of the Common Council of New York City. In this position, like Valentine and Shannon before him, he published an annual Manual of the Corporation of the City of New York, which detailed the events of the year, Common Council minutes, offered an assortment of maps, and included political and historical notes on the city. Late, in 1877, he became the Chief Clerk to the Mayor and in 1881 was elected on the Democratic ticket to the United States Congress, a position he held until 1885. He died on December 9, 1913 and is interred in Greenwood Cemetery, Brooklyn. Learn More...

Hardy, John, Manual of the Corporation of the City of New York, 1870.

Haskel, D. C., Manhattan Maps, A Co-operative List, 1237.
Looking for a high-resolution scan of this?