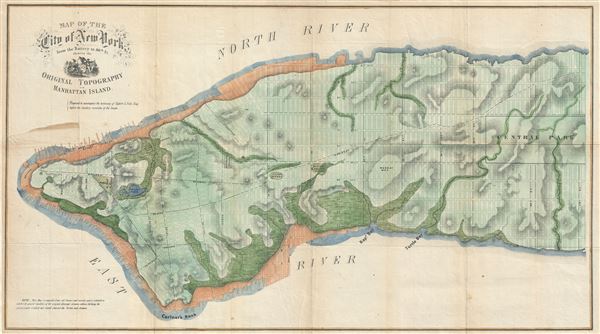 An uncommon 1859 map of lower Manhattan, New York City, by Egbert Viele, the famed city planner who spearheaded the construction of Central Park. The map covers lower Manhattan to about 80th street and includes the city's grid plan overlaying a topographical breakdown of the city illustrating various canals, swamps, rivers, ditches, ponds, meadows, and drainage basins. Public Squares and important buildings are also noted. The fledgling Central Park, at this time approved but as yet unplanned, is blocked out. The Collect Pond, the cause of the social disintegration in lower Manhattan that lead to the development of the gang ridden Five Points, is shown, along with the original channel leading form it that eventually became Canal Street.

Viele is best known for his large format 1865 Sanitary and Topographical Map of the City and Island of New York which studies groundwater, topography, and drainage throughout the city. Viele's great map took years to compile based upon old city surveys and records. Thus this map is a remarkable discovery showing the early progress of Viele's work on the great 'Sanitary and Topographical Map' or 'Waterways Map' for which he is most famous. Viele theorized, correctly, that illness and epidemic disease in New York was caused by insufficient drainage. This theory, developed while observing a disastrous epidemic devastate a military encampment in Laredo, Texas, led not only to the development of Central Park, but also to the construction of proper drainage systems for many of the then undeveloped parts of Manhattan. Viele prepared this map shortly after his military service in Texas and early in his civilian career as a Civil and Topographical Engineer for the City of New York. It shows the early stages of his famous 'Waterways Plan' that today beard his name. This map was prepared for a report to the Senate of New York State on the sanitary condition of New York - something of which Viele had a very poor opinion. Of this map he writes,

The map accompanying these remarks will serve to convey some idea of the extent of the evil to which the city is exposed, if the subject of proper drainage continues to be disregarded.

The present map is unmistakably a precursor to the larger Viele Plan. Though covering a smaller area - only to 80th street, the scale and style are the same. This map even features many of the same notations. It is an exceptional, important, and scarce discovery.

Mather, Ely, Schell, Doherty, Brandreth, Report on the Sanitary Condition of the City of New-York, NY Senate no. 49, 1859.

Good. Laid down on archival tissue for stability. Verso repair and stain, left side.