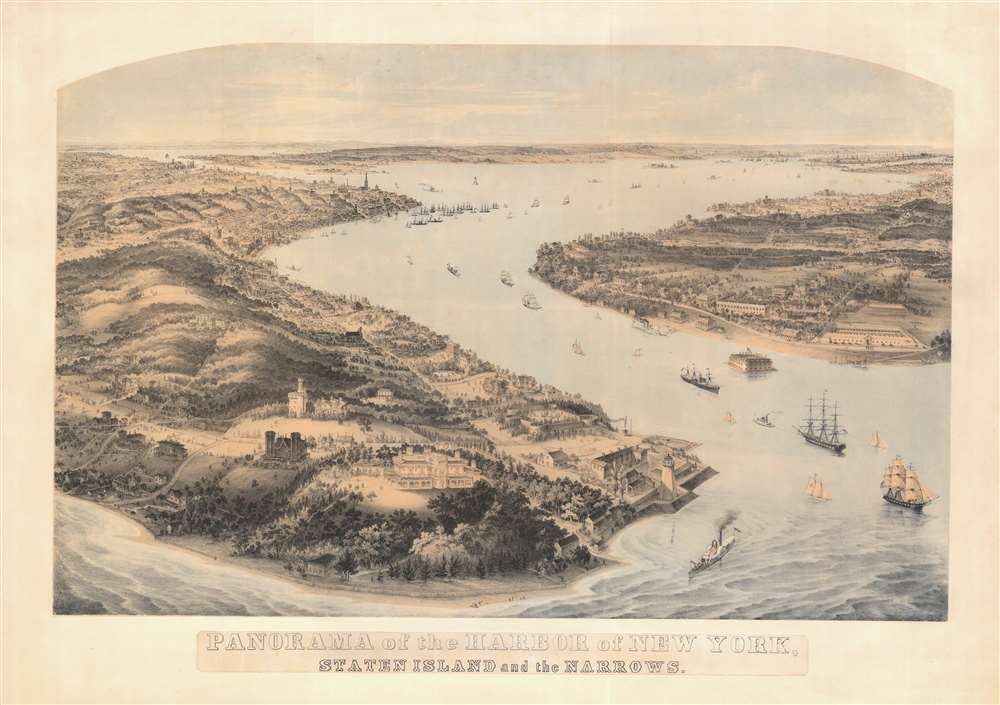 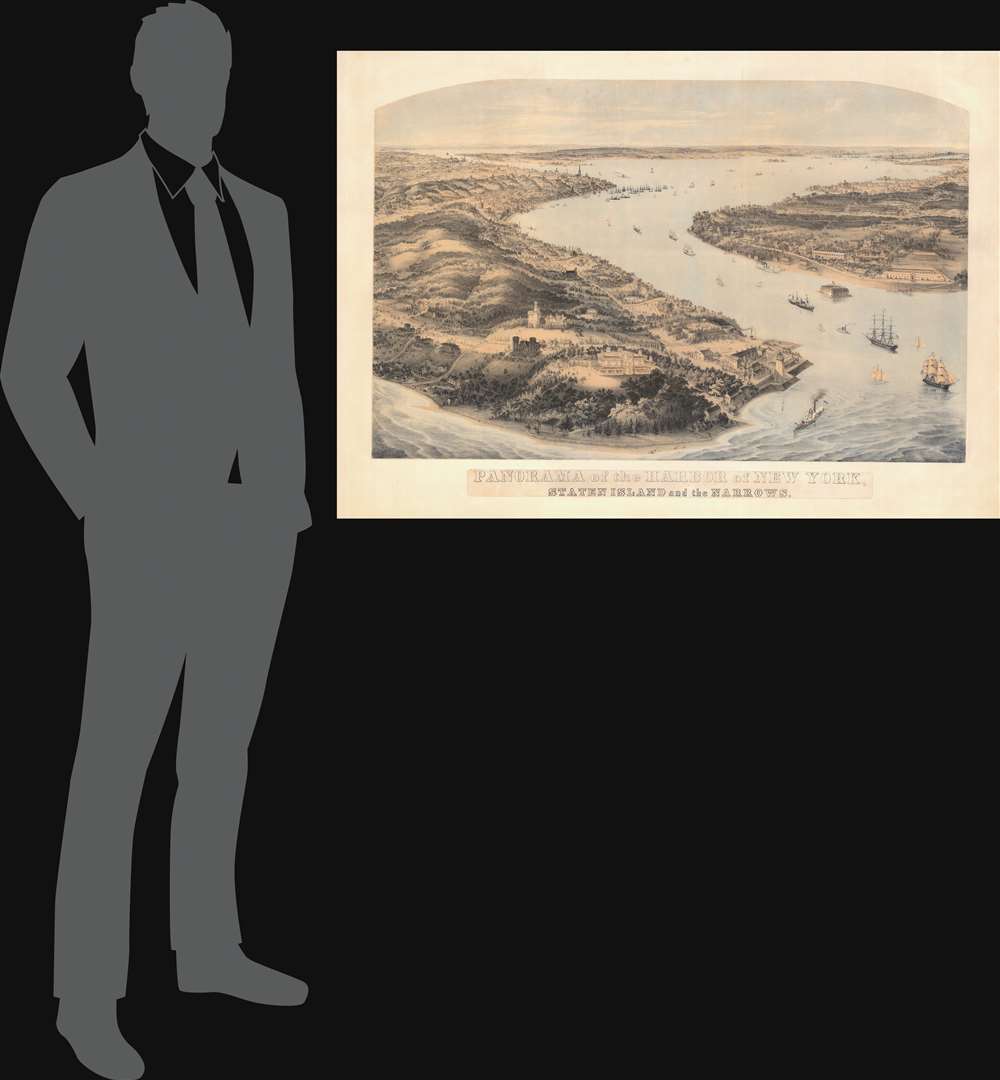 The view looks northward through the narrows towards Jersey City and Manhattan, which appear in the distance. Staten Island near Fort Wadsworth (Flagstaff Fort / Battery Weed) dominates the foreground, with multiple gracious gilded age mansions evident. Across the river, parts of Brooklyn, including Bay Ridge and Owl's Head, are evident. We can recognize Red Hook, Governors Island, Ellis Island, and Bedloe Island (Statue of Liberty). The Verrazzano-Narrows Bridge now crosses New York Harbor at this point, and most of the impressive private estates are now lost to the highway system.

This view was drawn by John Bornet and published by Goupil and Company of New York. It was printed in New York by Nagel and Weingärtner. The view is rare by any measure. Reps notes just four institutional holdings. We are aware of one instance of it on the private market.

John Bornet (1810 - 1910) was a New York based landscape painter and lithographer active in the middle part of the 20th century. Bornet is best known for his New York City views, which range from bird's-eye perspectives to views of specific buildings. In America on Stone, (p. 100), Bornet is described as 'a very competent artist'. He appeared in New York directories between 1852 and 1856 and all of his existing work dates to this period. Little is known of his life beyond his work and after 1856 he appears in no records. We found only one record regarding his birth and death, suggesting he lived a prodigiously long life, uncommon at the time, but certainly possible. Learn More...


Jean-Baptiste Michel Adolphe Goupil (March 7, 1806 - May 9, 1893) was a French publisher and seller of art and prints during the 19th century. Born n Paris, he founded the company Goupil et Cie, which became one of the world's biggest art dealers during the 19th century. Goupil founded his first company in 1827 and then partnered with Henry Rittner (1802 - c. 1840), another Parisian print dealer, in 1829. Rittner disappears in 1840. Goupil found a new associate, Théodore Vibert (1816 - 1850), between 1841 and 1842 and the firm become Goupil, Vibert et Cie. Beginning in 1848, Goupil and Vibert embarked on an ambitious plan to create a worldwide network of associated dealers and opened branches in London and New York. Vibert died in 1850 and left several children, whom Goupil looked after. Starting in 1846, Goupil began to move away from dealing exclusively in prints and began buying and selling paintings. Over the next few decades, Goupil's firm became one of the largest art dealers in the world. Goupil, who lost two sons during his lifetime, slowly began to withdraw from working in 1884 and his associate Léon Boussod (1826 - 1896) took over the business in 1886 and renamed it 'Goupil et Cie - Boussod, Valadon et Cie successeurs'. The firm continued to operated until Vincent Imberti bought the company's archive in 1921. Learn More...


Louis Nagel (July 28, 1818 - August 10, 1870) was a German-American lithographer active in New York and San Francisco in the middle part of the 19th century. Nagel was born in Darmstadt, Germany. It is unclear when he emigrated to the United states, but he was active as a lithographer in New York as early as 1844. He exhibited the American Institute in both 1846 and 1847. He partnered with fellow Darmstadt-born lithographer Adam Weingärtner (1813 - 1883), creating the firm 'Nagel and Weingärtner'. Census records suggest he and his wife shared a residence with Weingärtner and his wife. The firm remained active until 1856, advertising as the only firm in New York to use the lithographic techniques developed by the Parisian Rose-Joseph Lemercier (1803 - 1887). This most likely refers to Lemercier's shading techniques. When the firm broke up, Nagel relocated to California, where he set up shop and continued to produce views and maps, at first independently (1858 - 1861), then in partnership with R. W. Fishbourne and Charles C. Kuchel (1862), then once again independently (1863 - 1865). He died in 1870. Learn More...


Adam Weingärtner (October 10, 1813 - August 3, 1883) was a German-American artist and lithographer active in New York in the middle part of the 19th century. Weingärtner was born in Darmstadt, Germany. He partnered with fellow Darmstadt-born lithographer Louis Nagel (1818 - 1870), creating the firm 'Nagel and Weingärtner'. Census records suggest he and his wife shared a residence with Weingärtner and his wife. The firm remained active until 1856, advertising as the only firm in New York to use the lithographic techniques developed by the Parisian Rose-Joseph Lemercier (1803 - 1887). This most likely refers to Lemercier's shading techniques. Weingärtner served in the American Civil War (1861 - 1865) with the 98th Pennsylvania Infantry. He naturalized as a U.S. Citizen in 1874. He died in Hoboken, New Jersey, in 1883. Learn More...

Good. View has been extracted from the original sheet, trimmed to the printing and laid down on similar stock - likewise with the title, which appears on the same backing sheet below the view. Likely the work of a 19th century framer. Otherwise good.