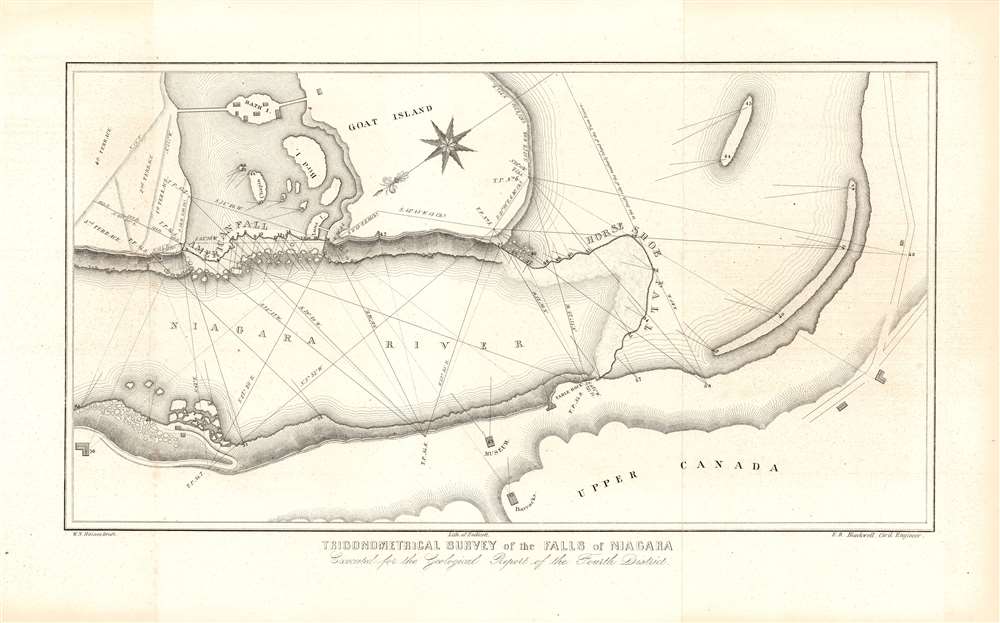 This scarce 1843 trigonometrical survey of Niagara Falls accompanied the first official Geological survey of the State of New York. This map - oriented to the southeast - details both the American Falls, and the Horseshoe Falls in Canada. Also depicted are several islands and on the river and buildings around the falls, including the Canadian barracks overlooking the falls, and the original location of the Niagara Falls Museum, the oldest museum in Canada. This, at the time, consisted solely of its founder's five thousand item plus taxidermy collection. In the decade to follow, the collection was increased by the additions of mastodon remains, a whale skeleton, and four Egyptian mummies (the propriety of the inclusion of human remains in a taxidermy exhibit would not have been questioned in that era.) In 2002, one mummy from the collection was positively identified as belonging to Pharaoh Rameses I, who has since been repatriated to Egypt.

This map was printed for inclusion in James Hall's Geology of New York; Part IV, having been drawn by W. S. Haines from an 1841 survey of the region. Hall's Geology is well represented in institutional collections.

Edwin R. Blackwell (fl. c. 1835 - c. 1880) was an accomplished civil engineer living in Black Rock New York, near the Niagara Falls in the mid to late 19th century. Blackwell worked with various railroad companies and contractors as a surveyor and engineer and was highly regarding for this work in the Buffalo, New York area. Blackwell is best known for his 1841 work, in conjunction with Z. Allen, in the surveying of the Falls and calculation of the power of the Falls. Based on detailed measurements and various soundings Blackwell determined that the horse-power generated by the falls was 4,533,334. Learn More...

OCLC 70112596. Impressions of Niagara, The Chares Rand Penny Collection, 170.
Looking for a high-resolution scan of this?