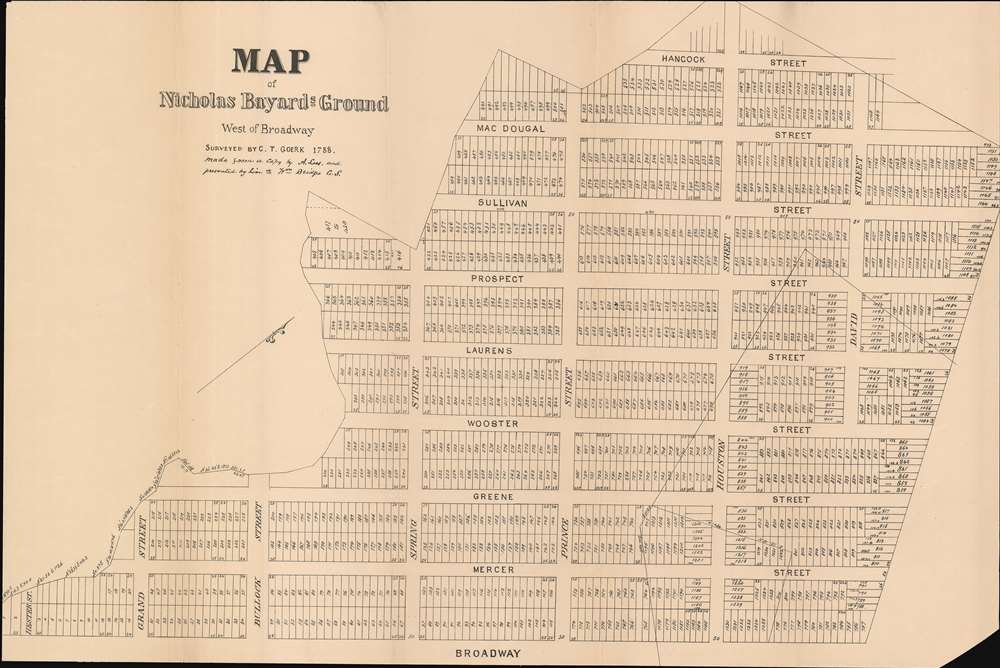 A facsimile of one of the first attempts to impose a street grid on Manhattan Island.
$750.00

This is a c. 1920 copy of a 1788 Casimir Theodor Goerck survey map of Soho. It comprises one of the first times a street grid was imposed on Manhattan Island. Depicting the neighborhood from the east, the map stretches from Grand Street to David Street and from Hancock Street (since consumed by Sixth Avenue) to Broadway. Commissioned in 1788, the Bayard family hired Goerck to survey the part of their estate west of Broadway and to lay out streets and lots so the land could be sold. Although Goerck successfully imposed the grid, creating Mercer, Greene, Wooster, Laurens (now LaGuardia Place), Thompson, Sullivan, and MacDougal Streets that now make up the core of Soho and part of Greenwich Village, his plans broke down near the edges of the estate, since the streets had to connect with existing ones.

This map was acquired as a part of a large collection of New York cadastral maps associated with the layer Ronald K. Brown, a Deed Commissioner operating in the late 19th and early 20th century with an office at 76 Nassau Street, New York - not far from the office of John B. Holmes, the map publisher. Most of the maps in the collection, including the present map, bear Brown's stamp on the verso. The maps were passed to Dominic Anthony Trotta, a real estate agent working under Brown. Brown seems to have ceased business around 1919, but Trotta continued as a real estate agent, becoming a New York Tax Commissioner in 1934 under the Fiorello H. La Guardia administration. The maps remained with Trotta's heirs until our acquisition of the collection.

This map was 'made from a copy by A. Loss and presented by him to William Bridges, who was City Surveyor at the time.

Casimir Theodor Goerck (c. 1755 - November 19 or December 11, 1798) was one of the few people officially recognized as 'city surveyor' for New York City. Of Polish or German origin, Goerck came to America to serve as an artillery officer in the Continental Army during the American Revolution. Per The Iconography of Manhattan Island, Goerck first arrived on the scene in New York City in 1785. New York City hired Goerck that year to survey the city's 'Common Lands'. The Bayard family, relatives of Peter Stuyvesant, hired Goerck in 1788 to survey the part of their estate that was west of Broadway so that the land could be sold in lots. This survey resulted in the implementation of one of the first attempts to apply a grid to Manhattan Island. Mercer, Greene, Wooster, and other streets that are now at the core of Soho were laid down here. Goerck was asked once again in 1794 by the Common Council to resurvey the 'Common Lands' in an effort to make the lots more rectangular and regular. He also was tasked with adding roads, all in an effort to help facilitate the sale of the 'Common Lands'. After two years, Goerck completed this second survey in 1796. Goerck was commissioned by the Common Council yet again in 1797 to prepare a map of the city as it existed with the help of French architect Joseph-François Mangin. Unfortunately, Goerck died of yellow fever before this map was finished. Learn More...

Very good. Mounted on linen. Light wear and toning along original fold lines. Blank on verso.
Looking for a high-resolution scan of this?