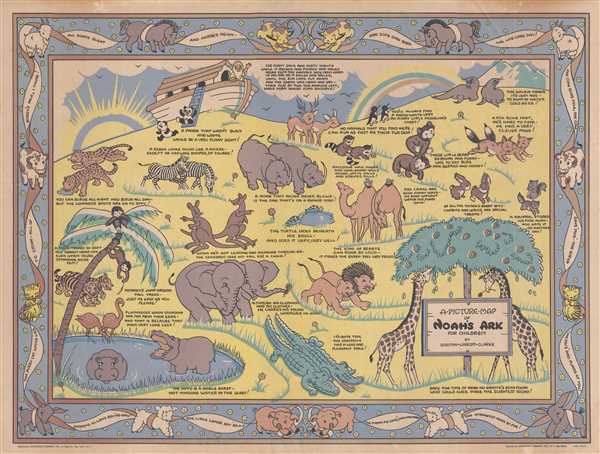 A charming pictorial map of animals disembarking from Noah's Ark. Perfect for a child's bedroom!

This is a c. 1930s pictorial children's map of the Noah's Ark bible story. The map illustrates the end of the story, after Noah saves a pair of every species of animal and sails in an ark for forty days and nights. Noah can be seen waving goodbye to all of his animal companions as they leave the ark to begin news lives since the flood has receded. A pair of zebras, pandas, leopards, elephants, lions, and giraffes are just a few of the animals making their way down the mountain after disembarking. Each couple is accompanied by a short poem that uses teaches a lesson about an attribute of each animal. The whole is surrounded by a pictorial frame filled with illustrations of barnyard animals. A ribbon connects them all together and bears other short poems about the goats, sheep, horses, and kittens illustrated along the border.

This map was created by Dorothy Linscott Clarke and published by the Hagstrom Company in the 1930s.

Dorothy Linscott Clarke (April 29, 1903 - May 17, 1992) was an American artist known for pictorial maps. She created pictorial maps of Vermont and Worcester County, Massachusetts, along with fantasy maps of subjects including Noah's Ark. Learn More...