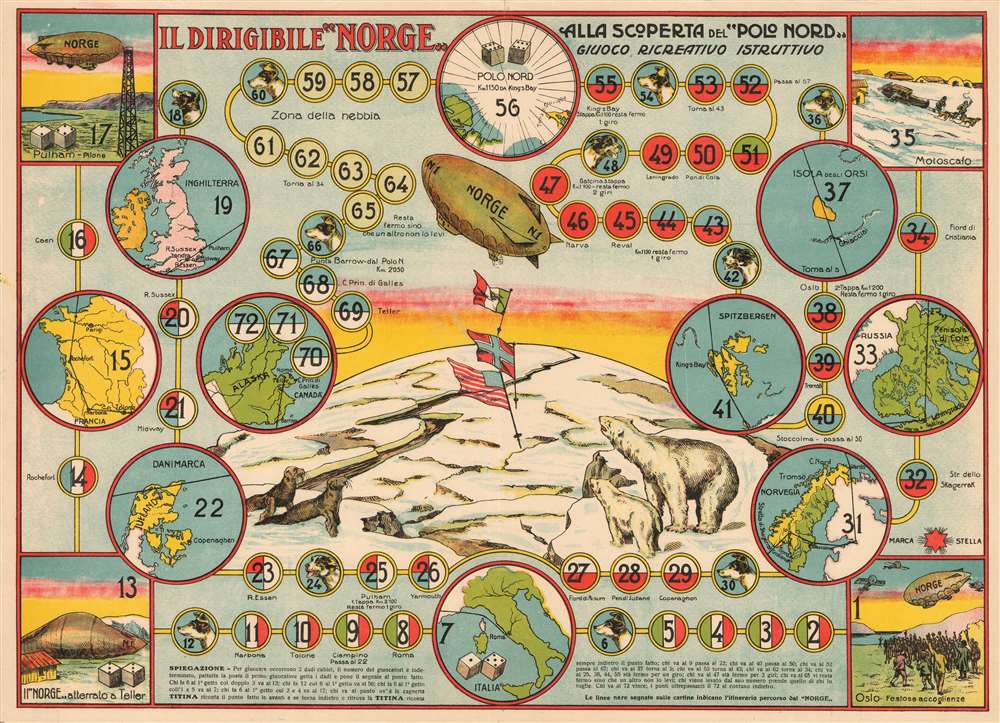 First crossing of the North Pole.

This is a cartographic Marca Stella board game, printed in Milan c. 1926, to celebrate the successful Amundsen-Ellsworth Transpolar Flight of the airship Norge. This voyage boasts the first undisputed sighting of the North Pole, May 12, 1926. Three previous claims to have achieved the Pole (Cook in 1908, Peary in 1909, Byrd in 1926 - a few days before the Norge) are all disputed as being either inaccurate or fraudulent. The Norge was an Italian-made dirigible, its designer and pilot the Italian Umberto Nobile (1885 - 1978). The achievement of winning the pole was hailed in Italy as a great achievement. Although not dated, the publication of this charming map-game would remain timely for a very short period: in just two years, Nobile would fly to the pole again in his second airship, Italia, of which there is no mention on this piece - firmly dating it.

The Amundsen-Ellsworth 1926 Transpolar Flight of the Norge was the first verified journey of any kind to the North Pole, an overflight that took place May 12, 1926. Norge was consequently also the first aircraft to fly over the polar ice cap between Europe and America. The expedition was proposed by polar explorer Roald Amundsen (1872 - 1928), who in 1925 telegraphed aeronaut Umberto Nobile to meet him in Oslo, in order to make the airship journey across the Arctic. Nobile accepted, and modified his Airship (then simply named N-1) to be better suited for the Arctic. Meanwhile, funding for the voyage had been secured from the Aero Club of Norway. Nobile renamed his aircraft in recognition of this: 'Norge' = 'Norway.' Some 100,000 USD also came from American explorer and adventurer Lincoln Ellsworth (1880 -1951), who accompanied the expedition. The crew of the Norge comprised Amundsen as leader, Nobile as pilot, Ellsworth as navigator, and 13 crew - including Nobile’s dog Titina, the sole member of the expedition to be pictured clearly on this piece, gracing every sixth space of the board.

The game (a simple dice-driven race game, similar to Goose) traces the 1926 voyage of the Norge from Rome then on to the North Pole until its final landing in Alaska. Each major stage of the journey is marked with either a vignette or a medallion containing a map of the relevant region (each including a black line indicating the path of the airship. These include Italy, France, Great Britain, Denmark, Sweden and Norway, the Soviet Union, Bear Island, Spitzbergen, the North Pole, and finally Alaska. The vignettes shows Norge leaving Norway on May 11, 1926, Norge at her mooring in Pulham (U.K.), a motor sled and a camp (Spitzbergen? Bear island?), and a spent, deflated Norge at her final landing in Teller, Alaska. The center of the image shows seals and polar bears admiring the flags of Norway, America, and Italy, these having been dropped on the pole from the airship.

This game was printed in Milan in 1926 or 1927 by Marca Stella. This board game is extremely rare. None are cataloged in OCLC, and we have seen no other examples on the market. We are aware of one other example in a private collection.

Marca Stella (fl. 1900 - 1950) were an Italian Milan based commercial publishing house, operating from 1900 to 1950. While they appear to have done some advertising work, they specialized in colorfully-printed products for the childrens' market, in particular a long - lived series of paper toy soldiers. The inherently ephemeral nature of unbound printed work, combined with the tender mercies of young boys entrusted with inexpensive yet fragile playthings, enhance the scarcity of Marca Stella's oeuvre. Learn More...

Excellent. Color printing.
Looking for a high-resolution scan of this?