1844 Black Map of North America and the United States 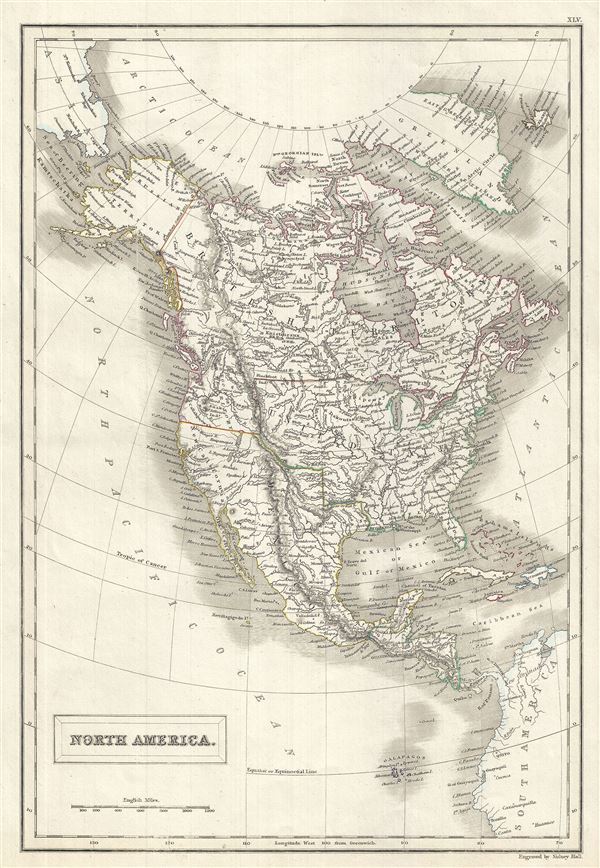 1844 Black Map of North America and the United States

A fine example of Adam and Charles Black's 1844 map of North America. The map covers the continent from the North Georgian Islands in the Arctic Ocean to the Galapagos Islands in the North Pacific Ocean. Also covers Greenland and Iceland. Includes the Russian and British territories in America, Canada, the United States, Mexico, Central America and the West Indies. Throughout the map notes several important cities, towns, rivers, islands, lakes mountains and a host of other important topographical features.

In Mexico the rebellion of the English speaking region of Texas caused tension between the liberals and the conservatives within Mexico, as well as between Mexico and the United States. The map predates the 1848 treaty of Guadalupe Hidalgo, which formally ended the Mexican American War, annexed all Mexican territory north of the Gila and Rio Grande Rivers, including the short lived Republic of Texas, to the United States, increasing the country's size by about 35%. Texas is shown in its grandest incarnation, extending north as far as the Arkansas River and west as far as the Rio Grande (or Rio de Norte), inclusive of much of modern day New Mexico, Colorado, and Kansas. The map thus details highly ephemeral period before the 1849 Gold Rush and the territorial reconfigurations that followed in the wake of America's great westward expansion. This map was engraved by S. Hall for issue as plate no. XLV in the 1844 edition of Black's General Atlas.