1823 Dirwald and Mollo Map of North America - with unusual Transmississippi 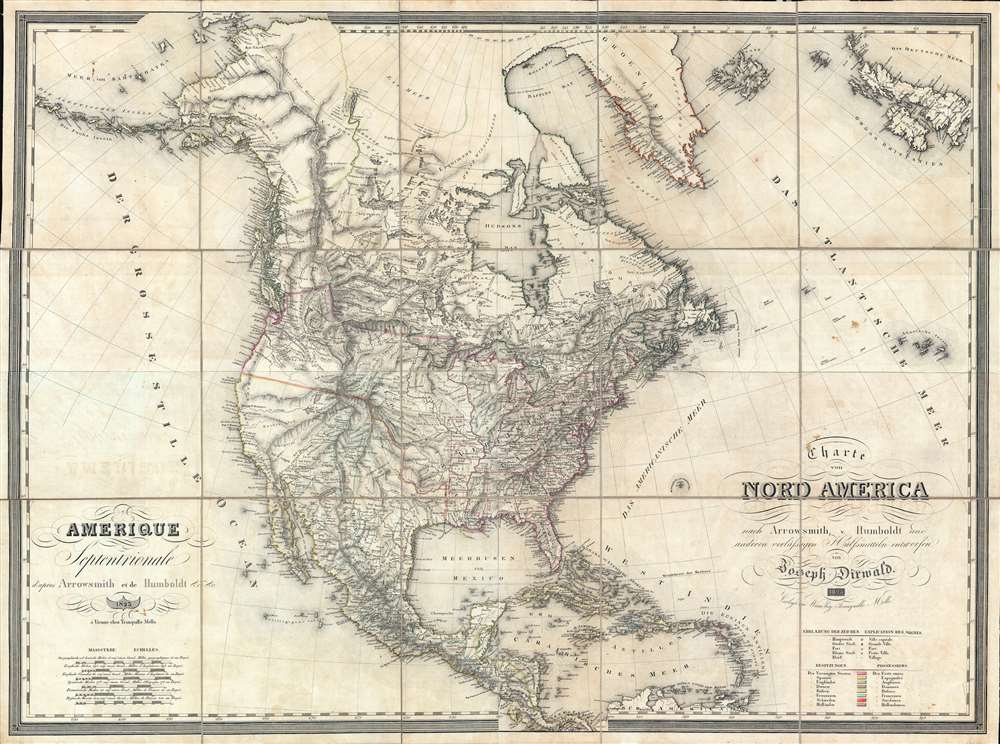 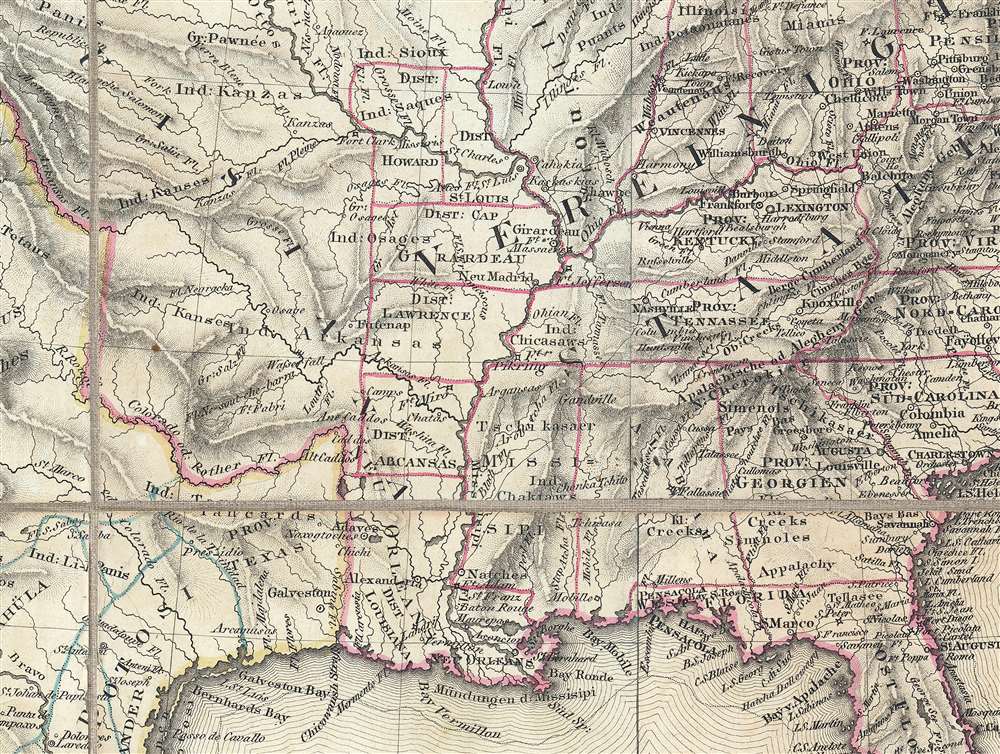 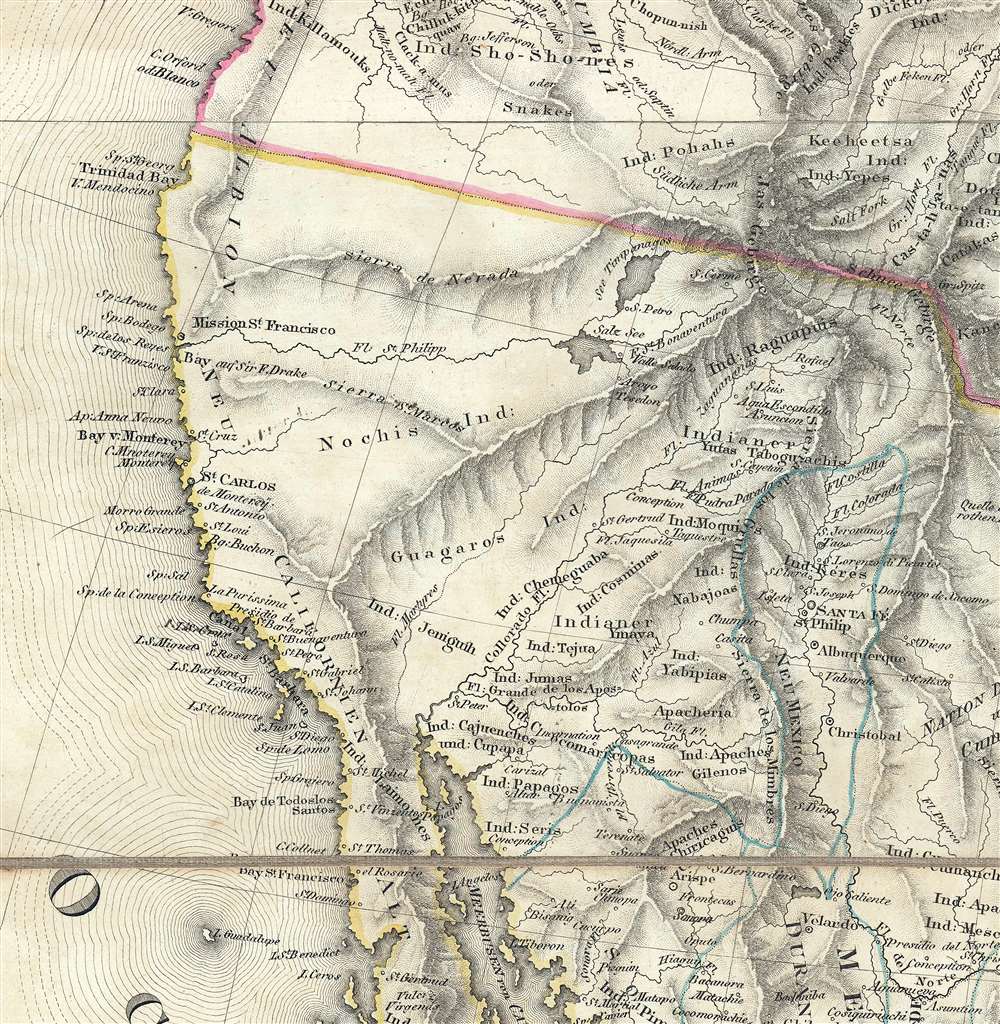 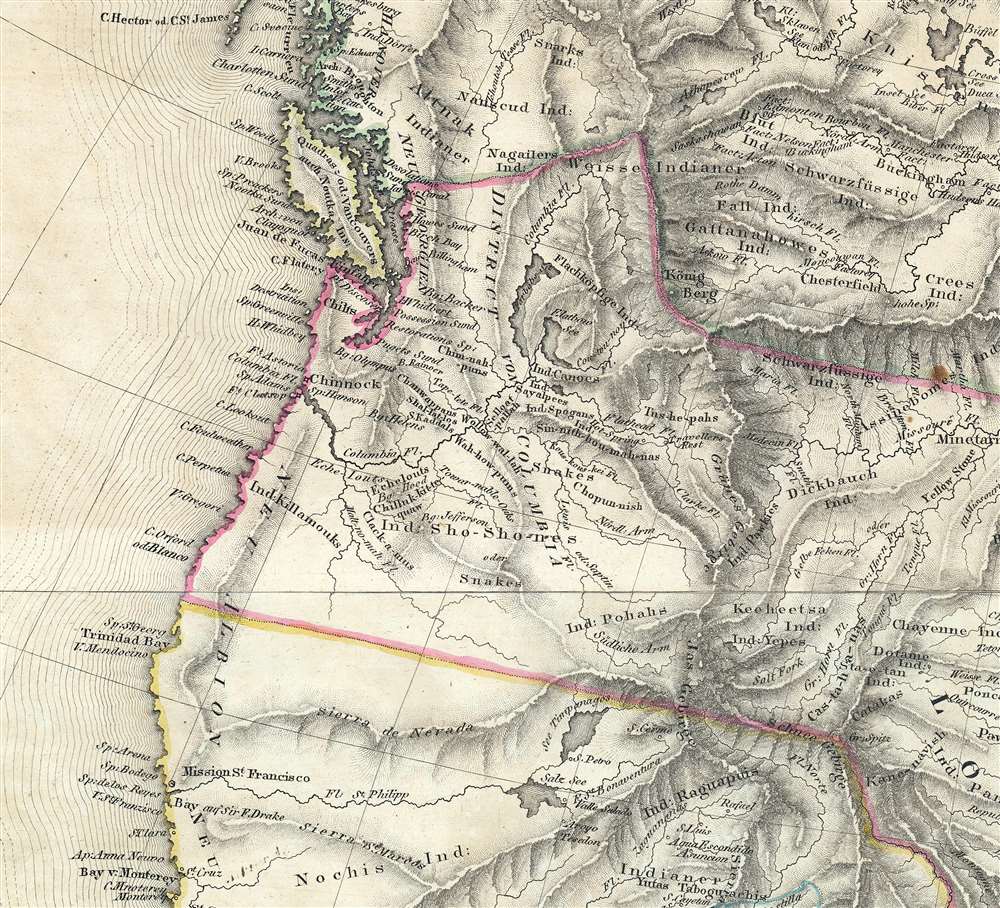 1823 Dirwald and Mollo Map of North America - with unusual Transmississippi

This is an exceedingly rare 1823 wall map of North America published jointly by Tranquillo Mollo and Joseph Dirwald[t]. Although not published until 1823, this is one of the few maps to represent the ephemeral period between 1804 and 1818 when the United States was consolidating its hold on the newly acquired Louisiana Territory and expanding into what is today the Missouri / Arkansas region. It is the only map we have been able to identify to illustrate the early American districtization of Louisiana Territory.

This map exhibits a very ephemeral period in the history of the Transmississippi in the vicinity of Missouri, Arkansas, and Louisiana. Although dated 1823, the cartography here, with various land districts hugging western shores of the Mississippi River, dates to roughly 1818. Following March 10, 1804, known as 'Three Flags Day,' when the United States physically took possession of Louisiana from France, both Orleans Territory and the District of Louisiana were created in what is modern day Louisiana – both are identified on this map. The lands north of the 33rd parallel were divided into five military districts loosely based upon earlier Spanish land districts: New Madrid, Cape Girardeau, Ste. Genevieve, St. Charles, and St. Louis. Of these counties, New Madrid was the largest, and from it, the District of Arkansas was spit off in 1806, for judicial reasons, becoming Arkansas County in 1813. Later, in 1815, the sprawling Lawrence County, as seen here, was split off. Howard County, named after deceased territorial governor Benjamin Howard was divorced from the St. Louis District in 1816 and occupied the full northwestern quadrant, on both sides of the Missouri River, of modern day Missouri.

Odd Configuration of the Transmississippi

The mapmakers credit Aaron Arrowsmith and Alexander von Humboldt for the cartography, particularly in the Transmississippi, but our own study of the map suggests only a limited relationship to their work. The present map offers significantly more, although mostly inaccurate, detail than either predecessor map. While the geographical information included in the map is comparable to the maps of Melish, Arrowsmith, Tanner, and Brue (1823 - 1825), the topographical detail this Dirwald/Mollo map is far more comprehensive and dramatic, depicting a sense of the scope and grandeur of the mountain ranges of the Transmississippi West, including the Rocky Mountains and other ranges in Alaska and California. The Rocky Mountains loosely follow the lines laid down by Humboldt, but several large mountainous spurs extending westward as far as the Pacific are unique. Both the Great Salt Lake (Timpanagos) and Utah Lake (Slaz See) are identified. The cartographer has merged the apocryphal Timpanagos, Buenaventura, and St. Phillip (San Felipe) Rivers, as the St. Philip River, with a source in Lake Utah and drainage into San Francisco Bay. In Texas, Galveston is identify, in the wrong location, although the Congress of Mexico's establishment of the Port of Galveston in 1823. The map also provides a highly detailed accounting of the many Indian Tribes of the Transmississippi West, one of the most impressive we have encountered on a printed map of the period.

The map further illustrates American claims to British Columbia. Americans argued that most of the Pacific Northwest should be part of the United States as a legacy of the 1803 Louisiana Purchase. England, on the other hand, argued for residual claims to the region derived from its fur trading empires. The Oregon Dispute, as it came to be known, become an important in geopolitical issue between the British Empire and the United States, especially after the War of 1812. American's adopted the slogan '54-40 or Fight!' until the Oregon Question was finally resolved by the 1846 Oregon Treaty.

This map is rare. It appears to have been issued in at least three editions 1819, 1823 (present example), and 1849 as the Neue allgemeine geographische (und statistische) Ephemeriden for 1819 advertises the publication of this map, we can identify that issue as the first edition. The Warren Heckrotte Map Collection at Stanford University owns an example dating to 1819. A close study of the 1819 and 1823 examples has suggested only a single change, the removal of the name, St. Philip, from a speculative river extending from Monterey Bay. The similarity of the cartography to the 1819 Heckrotte example also explains why the cartography of the Mississippi Valley above, is more accurate to 1818, as noted, than 1823, the date appearing on the imprint. This map is further not identified in Wheat, nor is in Rumsey's collection, no doubt a reflection of its extreme rarity. Known examples of the 1819 edition reside at Dartmouth and the University of Illinois. The University of New Mexico appears to have an 1849 edition. We have identified no other examples of the present 1823 state.

Tranquillo Maria Laurentio Mollo (August 10, 1767 - March 29, 1837) was Vienna based Swiss/Italian graphic designer, printer, art and music dealer, and publisher active in the late 18th and early 20th centuries. From about 1792 Mollo worked with the Vienna firm Artaria and Company. In 1798 he separated from Artaria to found, along with partner Franz Bernardini, his own music, art, and map publishing company, T. Mollo and Co. The partner collapsed after one year and Mollo took a new partner, Domenico Artaria, a scion of the Artaria family. In 1802 Mollo and Domenico acquired Artaria and Company from Carlo Artaria. Domenico and Mollo parted ways in 1804, after which Mollo published independently. Under his own imprint, he became one of Austria's most important globe and map publishers. He collaborated extensively with English and French publishers to bring French material to his work. Among his more significant collaborators was the Vienna publisher Joseph Dirwaldt. In 1832 Mollo passed the company to his sons, Eduard (1799-1842) and Florian Mollo (1803-1869). The Mollo brothers ran the business until 1839, three years after Tranquillo Mollo's death, before dividing the concern into separate business. Learn More...


Joseph Dirwaldt (fl. c. 1807 – 1825), sometimes spelt Dirwald, was an Austrian cartographer and map publisher active in the early 19th century. Most of his work was published in partnership with Tranquillo Mollo and includes several separate issue large format maps as well as at last two atlases. Learn More...