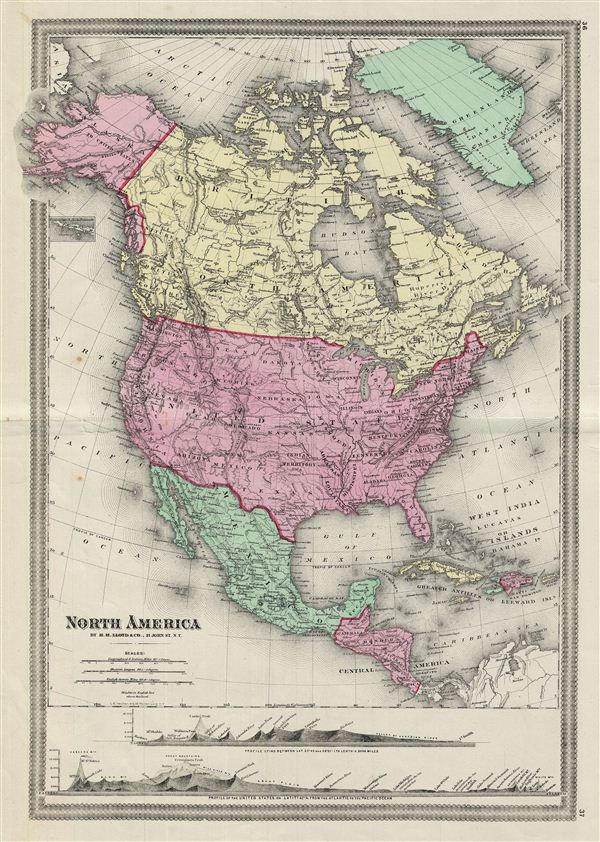 Identifies the ephemeral province of 'Stickeen' in the modern day Yukon.

This is a fascinating example of the 1862 H. H. Lloyd map of North America. Centered on the United States, covers from the Arctic Ocean to Panama, including Greenland and parts of South American and the West Indies. A tiny inset map in the upper left quadrant depicts the westward extension of the Alaska Peninsula. The maps lower quadrants contain an elevation profile of the United States from the Atlantic to the Pacific Ocean and another of the lands between latitude 33°43 and 38°01. Oklahoma is identified as the 'Indian Territory.' Although the map is undated, we can assign an approximate date as this is one of the rare maps to identify the 'Stickeen' territory in British North America, only in existence between 1862 and 1863. Map is hand colored to define national and regional boundaries. Prepared by H. H. Llloyd and Co., New York as plate nos. 36 and 37 for the 1862 edition of the Atlas of the United States.

Very good. Original centerfold visible. Minor wear along centerfold. Verso repair near the centerfold.
Looking for a high-resolution scan of this?