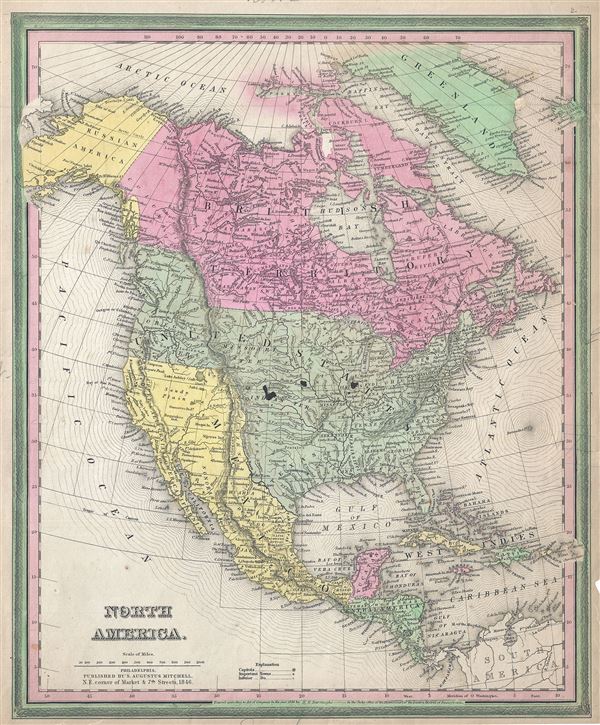 This is an important and scarce first edition example of S. A. Mitchell and H. N. Burroughs' 1846 map of North America. This hand colored lithographic map covers all of the United States, Canada, Russian America (Alaska), Mexico and Central America predating the Mexican American War and the Treaty of Guadalupe Hidalgo. The 1848 treaty, which formally ended the war, annexed all Mexican territory north of the Gila and Rio Grande Rivers, including the short lived Republic of Texas, to the United States, increasing the country's size by about 35%. Texas is shown in its grandest incarnation, extending north as far as the Arkansas River and west as far as the Rio Grande (or Rio de Norte), inclusive of much of modern day New Mexico, Colorado, and Kansas. A number of additional elements are of some interest, including an exceptionally narrow Lake Michigan.

Further north Mitchell sets the United States – British America border at 54°40' north latitude. This constitutes a strong stance in favor of American claims to the region. The Oregon Boundary Dispute, as it came to be known, evolved from conflicting commercial interests – mainly associated with fur trade – in the region. The British believed this territory fell into the land controlled by the Hudson Bay Company while expansionist Americans, championed by John Jacob Astor's Pacific Fur Company, asserted a claim to the region as far north as Russian America (Alaska). This conflict would eventually escalate into the 54°40' dispute. The turmoil ultimately gave rise to slogans like 'Fifty-four Forty or Fight!' and the catchphrase 'Manifest Destiny.' The dispute was not resolved until the 1846 Oregon Treaty which, through concessions on both sides, formally set the boundary at the 49th parallel.

The map thus details highly ephemeral period before the 1849 Gold Rush and the territorial reconfigurations that followed in the wake of America's great westward expansion. This is a rare transitional map produced by the mysterious engraver H. N. Burroughs, whose work for the Mitchell firm appears in 1846 between that of H.S. Tanner and Mitchell himself. Ristow notes, 'Nothing is known about Burroughs, but he was undoubtedly an employee or associate of Mitchell.' His fine and detailed work appears only in the hard to find 1846 edition of the Mitchell's Atlas. Dated and copyrighted 'Entered according to Act of Congress in the year 1836, by H. N. Burroughs in the Clerks Office of the Eastern District of Pennsylvania.' Issued as plate no. 2 in the 1846 edition of Mitchell's New General Atlas.