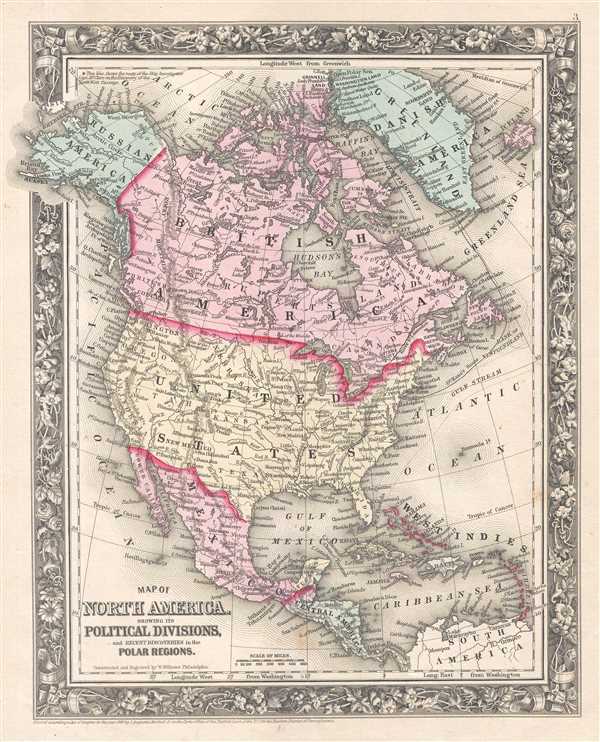 Traces the route of the Second Grinnell Expedition led by Dr. Elisha Kent Kane with the goal of locating the lost Franklin Expedition.

This is an 1861 Samuel Augustus Mitchell, Jr. map of North America. The map depicts the continent from the Pacific Ocean to the Atlantic Ocean and from the Arctic Ocean to Colombia and Venezuela in South America.

Franklin's Lost Expedition and American Efforts to Locate It

The second Grinnell Expedition, which took place in 1853 and was led by Dr. Elisha Kent Kane, is illustrated leaving Brooklyn and heading north, in an effort to locate Captain Sir John Franklin's lost Arctic expedition. Franklin's wife, Lady Jane Franklin, appealed to the United States government after three British expeditions were unable to locate her husband. As Congress dithered in passing an appropriations bill in order to purchase ships, American merchant Henry Grinnell purchased two brigs, outfitted them for Arctic service, and offered them to the government, which contributed more funds and a volunteer crew of Naval officers and men. Both the first Grinnell Expedition (launched in 1850) and the Second were unable to locate Franklin and men that departed from England aboard two ships in 1845. International attention had already been focused on Franklin's disappearance, which was reinforced by the Admiralty's offer of a reward for finding the expedition. Songs were written about him, and a statue was erected in London in his honor.

Canada (British America), the United States, Mexico, and Central America comprise the regions labeled here, along with the islands in the Caribbean. No political divisions are illustrated within Canada or the United States, although regions in the western United States are given labels such as Nebraska, Kansas, Texas, New Mexico, Oregon, Washington, and New Mexico without including any borders. Cities throughout the continent are labeled, from Ottawa, Toronto, and Quebec in Canada to Caracas and Cartagena in South America. Rivers, lakes, and mountain ranges are also illustrated and labeled.

This map was constructed and engraved by W. Williams and published by S. A. Mitchell Jr. in the 1861 edition of Mitchell's New General Atlas. Like many American map publishers of this period, Mitchell did not regularly update his copyrights, consequently this map is dated and copyrighted to 1860: 'Entered according to Act of Congress in the Year 1860 by S. Augustus Mitchell Jr. in the Clerk's Office of the District Court of the U.S. for the Eastern District of Pennsylvania.'


Wellington Williams (1814 - July 8, 1875) was an American engraver based in Germantown, Philadelphia. Williams was born in Bath, England. He emigrated to England as a young man, establishing himself in Philadelphia as a map and line engraver. He most notably engraved the maps for both Samuel Augustus Mitchell and his son, Samuel Augustus Mitchell Jr. There is some evidence that Williams resented the relationship and derived little profit from the success of two Mitchell atlases. He also engraved for William C. Woodbrid and D. Appleton. In addition, Williams also published several maps and views under his own imprint. His home was located at 1857 Mervine Street, 20th Ward, Philadelphia. His offices were located in Philadelphia, on 5th Street, below Chestnut. He was interred at the Laurel Hill Cemetery, Philadelphia. Learn More...