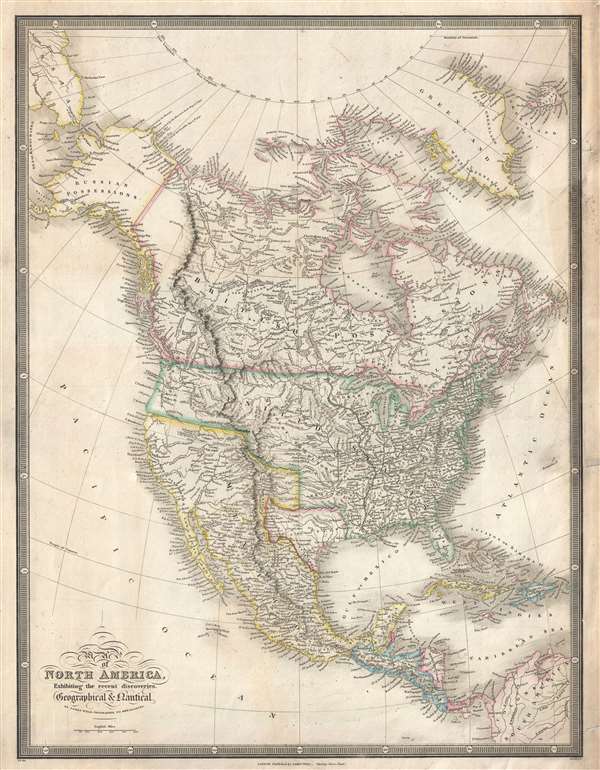 This is the scarce 1846 edition of James Wyld's map of North America including the Republic of Texas. The map covers all of North America from the Arctic to Panama and from Atlantic to Pacific, including Alaska, Greenland, and the West indies. The map includes a sprawling Missouri Territory extending to the Pacific, a double-wide Arkansas, the Northwest Territory, the Republic of Texas, and a speculative California/Great Basin. Wyld probably derived this map from a combination of information from the Hudson Bay Company and the Northwest Company. Accordingly, numerous fur trading forts and early Factory Houses are noted.

Wyld's map reveals an ephemeral Republic of Texas that predates Texan claims in New Mexico which would give rise to the 'Stovepipe' configuration. While the configuration of Teas is eye catching, this map's true interest lies further west in California and the Great Basin. Here Wyld has introduced four new rivers flowing from the Great Basin to the Pacific. In the words of Wheat,

The Map introduces a number of new ideas, such as the R. de Los Mongos and Mackenzie Branch at the height of the Willammarte; L. Yeutaw 'probably L. Timpanagos o the Spaniards,' with R. Sacramento or Timpanagos flowing from it, through 'Ictyaphages,' to San Francisco Bay. The R. Buenaventura flows to the coast at S. Antonio Mission, the R. de las Truches or S. Felipe flows to the sea at S. Luis Obispo, and the R. de los Martires, with which iris connected the R. de los Piramides, reaches the ocean just north of San Diego.

Further norther Wyld identifies the 'supposed Strait of Juan d Fuca.' Why Wyld doubts the position of the strait in the light of its thorough survey by the Vancouver expedition in 1799, and regular visits to the region by American and British traders, is unclear. Just south of the strait at the mouth of the Columbia River, he identifies Ft. George, the site of John Jacob Astor's fur trading colony Astoria. While firmly in American hands following the border established in the 1846 Oregon Treaty, Wyld retains the old name.

It is not clear when this map was first issued, but variations exist from at least 1828 to 1853, the full run of which gives clear illustration of the evolving political situation in North American from the Texan Revolution, through the entire Republic of Texas period, to the U.S. Annexation of Texas, the Mexican-American War, the annexation of upper California, and the California Gold Rush.