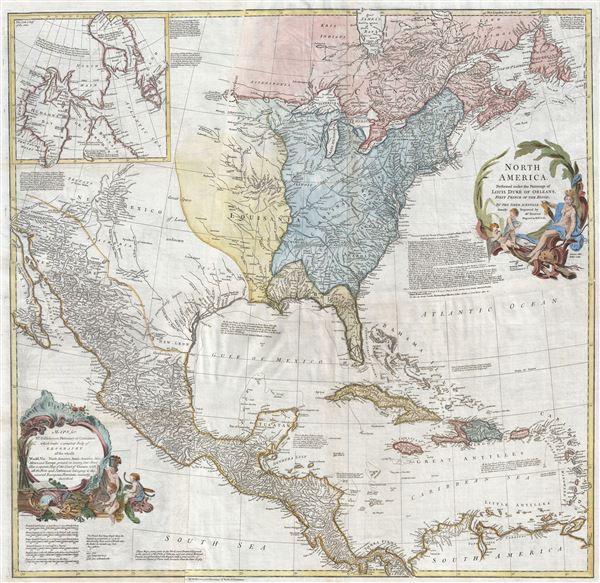 This is an exceptionally interesting and beautiful 1766 wall map of North America composed by Malachy Postlethwayte. Postlethwayte, an Englishman, prepared this map for issue in conjunction with the 3rd edition (1766) of his popular Dictionary of Trade and Commerce. Cartographically this map is based upon the earlier work of the French mapmaker J. B. B. D'Anville. This is a curious choice on Postlethwayte's part for he, a proud Englishman, uses every opportunity to rail against the land grubbing improprieties of the French cartographers, especially D'Anville, who he feels has unfairly usurped British claims in the New World. To his credit, King George's War ended in 1748 and the French and Indian War in 1763, so there was considerable animosity between the two nations. Many of the issues that influenced these wars, including overlapping colonial claims, are evident on this map. Postlethwayt hired the rather obscure English cartographer Mr. Bolton to update and rectify D'Anville's mapping. While evident throughout the map, some of the more noteworthy of these changes include the refutations of French claims east of the Mississippi, a rejection of French claims in Canada east of James Bay, and a reassertion of British claims in New Albion (north of New Mexico). True to form, Postlethwayte's interest is commerce, and, with specific reference to this map, cartographically wresting the lucrative fur trade in the upper Mississippi Valley and around the Hudson Bay away from the French.

In addition to Postlethwayte's interesting, sometimes ranting, and patriotic commentary, this map features a number of additional interesting elements inherited from D'Anville. In drawing the map D'Anville made heavy use of reports of Native American cartographic knowledge brought back by French fur traders in the upper Mississippi Valley. There are numerous instances, such as the river connection between the Lake of the Woods and Lake Winnipeg (which through not shown is alluded to textually as 'Assenipoel Great Lake'), where D'Anville's cartography specifically sites indigenous groups, in this case the Assenipoel and the Oshagac. Similarly, D'Anville notes American Indian groups and villages throughout the lower Mississippi Valley. Postlethwayte too makes copious mention of the American Indian Nations, even annotating D'Anville's work with the intention of highlighting British political alliances and trade agreements with the indigenous peoples, specifically the Iroquois and Chickasaws, over whom the British claimed informal sovereignty.

Engraved by R. W. Seale, this map was issued in the third edition of Postlethwayt's Dictionary of Trade and Commerce, 1766. The first edition, published in 1751, did not contain any maps. The second edition was issued in 1757, and was the first to incorporate maps. This map is from the third edition, published in 1766. A fourth edition was published posthumously in 1774. This is the second state of Postlethwayt's map of North America.

Postlethwayte, M., The Universal Dictionary of Trade and Commerce, Translated from the French of ... Monsieur Savary ... with large additions and improvements, incorporated throughout the whole work; which more particularly accomodate the same to the trade and navigation of these kingdoms, and the laws, customs, and usages, to which all traders are subject. (London) 1766.