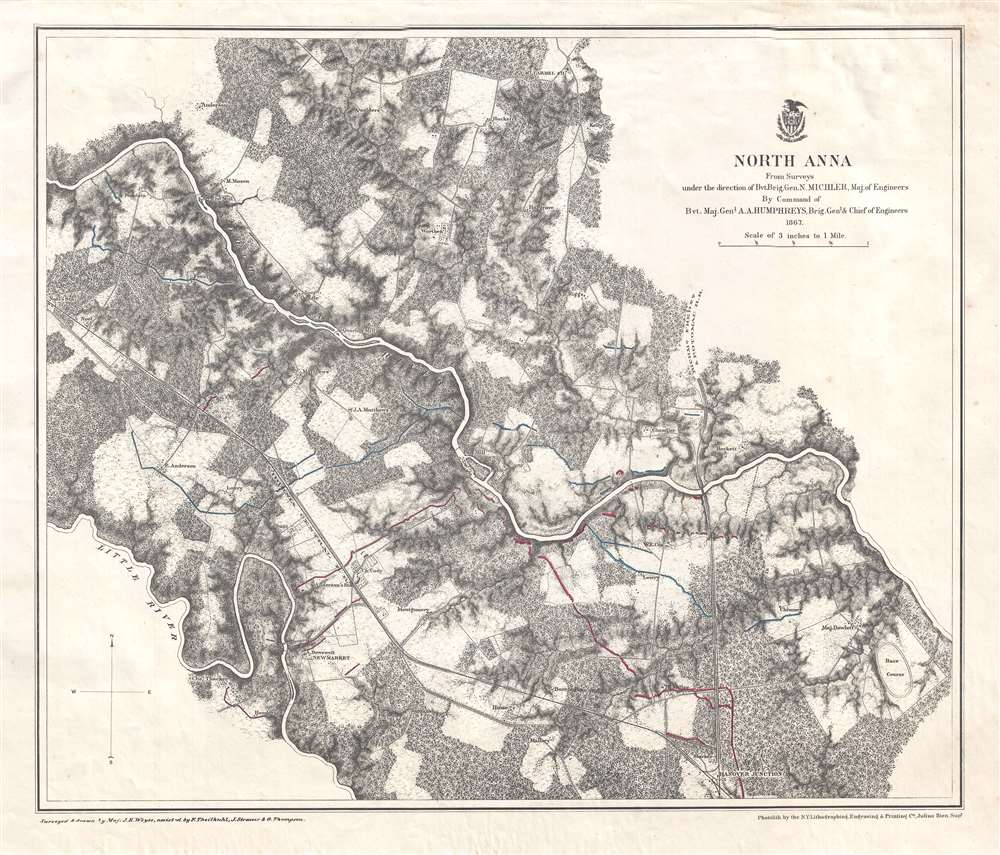 This is an 1867 John Weyss and Nathaniel Michler map of the battlefield of North Anna in Virginia, the third battle in General Ulysses S. Grant's 1864 Overland Campaign in Virginia. The map depicts the region from Noel's Station and the Little River to a race course near Major Dowlett's homestead and from Mt. Carmel Church to Hanover Junction.

The Battle of North Anna

The Battle of North Anna, fought between May 23 and May 26, 1864, was the third engagement in General Ulysses S. Grant's 1864 Overland Campaign against General Robert E. Lee's Confederate Army of Northern Virginia. More of a series of smaller actions instead of a pitched battle, North Anna is sometimes referred to by these smaller actions. Many American Civil War battles are known by multiple names, usually one is used by Union forces and the other by the Confederacy, and Civil War battles generally get their name from a geographic location near where they occurred. In this case, these smaller actions are known as Telegraph Road Bridge, Jericho Mills, Ox Ford, Quarles Mill and Hanover Junction. All of these engagements took place along the North Anna River, which runs through the middle of this map. Several of these locations, including Jericho Mill, Quarles Mill, and Hanover Junction are labeled here, though, due to the nature of the cartography, it is difficult to trace the progression of these skirmishes between Union and Confederate forces. Fighting occurred near Telegraph Road Bridge and Jericho Mill on May 23, while the other three took place on May 24. As with the previous two battles in the Overland Campaign, the Battle of North Anna ends in a stalemate, and Grant disengages and continues to the south, toward the next major engagement at Cold Harbor.