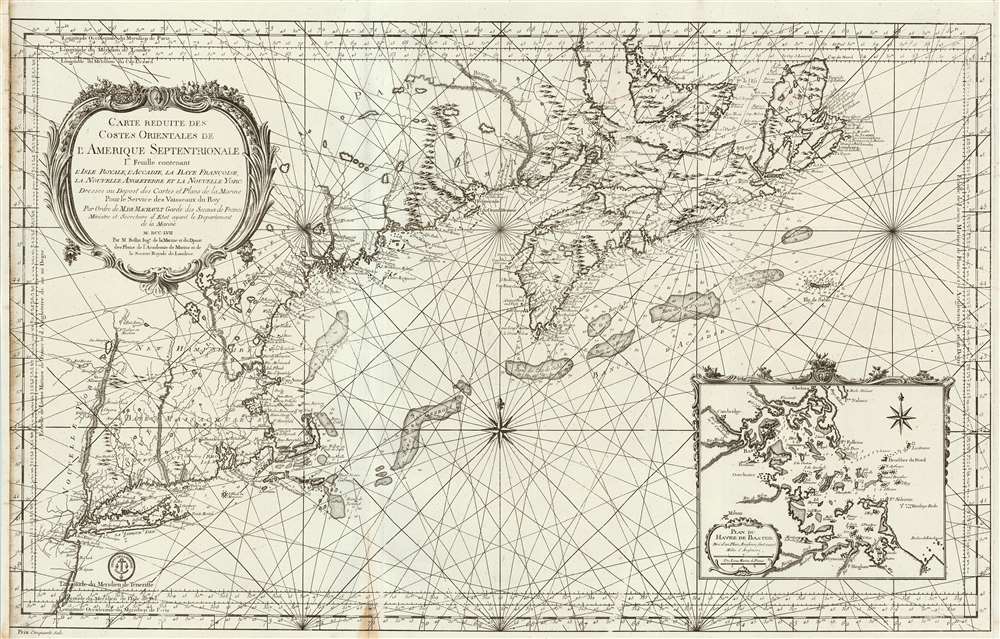 The Northeast Coast of America during the French and Indian War.
$1,850.00

This is a large, scarce, beautifully engraved 1757 French and Indian War Era Jacques Nicolas Bellin nautical map of New York, New England, and the Canadian Maritimes, including Nova Scotia and Isle Royale. This chart, along with many others, was issued on the order of the French Crown for anticipated naval action during the French and Indian War (1754 - 1763). The chart is superbly engraved, with dramatic pictorial mountains, elaborate river systems, and particular attention to approaches from Newfoundland to Boston Harbor, with depth soundings in profusion. The map extends from Isle Royale to the west shore of the Hudson (including the Mohawk River, Saratoga Lake, noting the portages to points north of the Hudson's shallows.)

The inset chart of Boston Harbor includes a number of inland strategic points, including the Roxbury Heights with their commanding view of the city (which, though exploited by nobody during the French and Indian War, would be crucial during the early days of the American Revolution.)

The French and Indian War (1754 - 1763) was the North American extension for the worldwide Seven Years' War (1756 - 1763). It is generally considered distinct from the global conflict due in part to its isolation, and in part to the participation of Native American peoples. The war fought between the British Colonies in North American and New France; each side being supported by Native American allies. Conflict erupted over conflicting claims to the Ohio River, Allegheny, and Monongahela River valleys, and the Great Lakes. The French believed that their territory extended eastward to the Appalachian Mountains, including all five of the Great Lakes, while the British crown had long made a practice of offering coast-to-coat grants. The French and British were in very different positions at the outbreak of the war. The British controlled the coast and North America largest cities, with a total population over 2,000,000. The French on the other hand, controlled Quebec, the Great Lakes, and the Mississippi Valley. Nonetheless, their hegemony in the region was tenuous at best. With less than 60,000 settlers in New France, the French instead relied on close ties with Native American nations. Although they initially won several important victories, the French were ultimately overwhelmed by better supplied more numerous British troops and, being occupied in their European war against Prussia, were unwilling to commit further reinforcements. Ultimately, the French surrendered to the British. In the subsequent 1863 Treaty of Paris, France surrendered all of its North American possessions to the Great Britain - forever transforming this history of North America.

The map was executed in 1757 for publication by the French Dépôt des Cartes et Plans de la Marine. Many were separate issues, although some were collected in the Dépôt's composite atlas, Hydrographie françoise. Recueil des cartes marines, générales et particulières dressées au Dépôt des cartes, plans et journaux. OCLC only lists separate copies of the map in the British Library, Villanova University, the University of Wisconsin, the Biblioteca Nacional de Espana, the Bibliotheque National de France, and Yale University. An example bound into a composite atlas can be found in the Rumsey collection; we see three examples of the Hydrographie in institutional collections, including the Leventhal.

Good. Left and right margins extended; some loss of border to left. Some discoloration at the extremity of one fold.