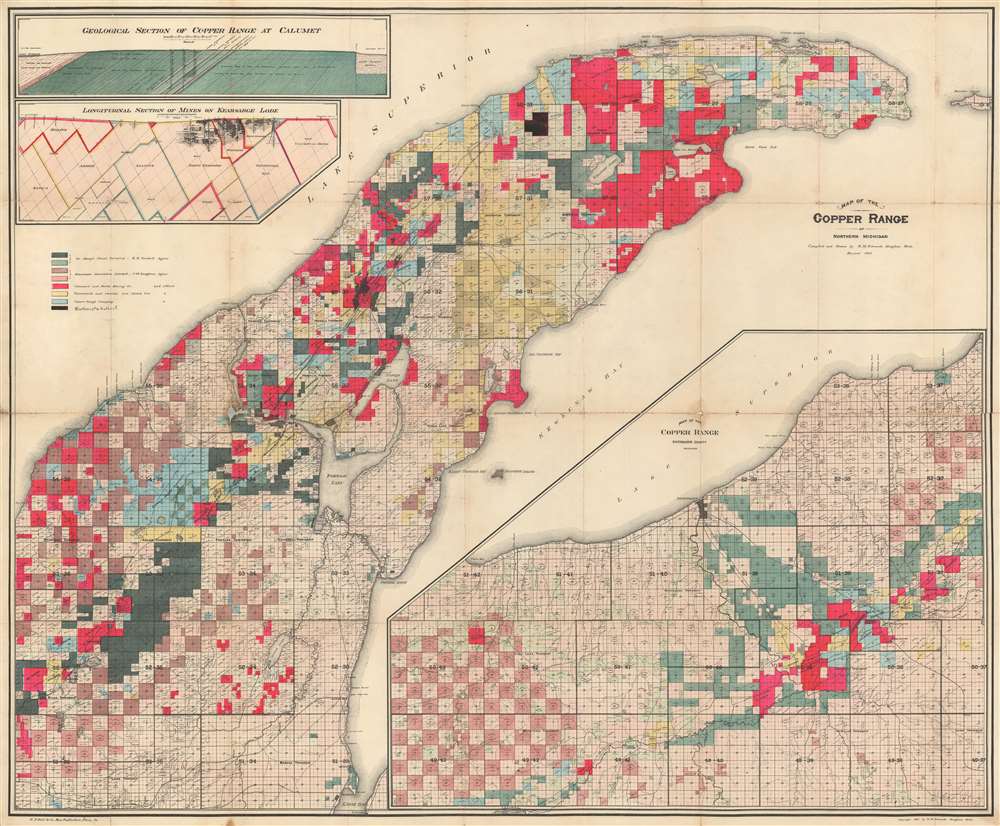 A rare map of Michigan's Upper Peninsula at the height of its mining industry.

This is a 1905 Richard M. Edwards map of the copper range of Michigan's Upper Peninsula. The map depicts the region from Elm River Township to Manitou Island and from Lake Superior to L'Anse Bay. Created to illustrate the mining claims throughout the Keweenaw Peninsula, eight different colors are used to differentiate between the claims of eight different mining companies. One such mining company, Winthrop and Hulbert, has been added in manuscript. Unfortunately, we have been unable to trace any history on this particular company. Others noted here, such as the Calumet and Hecla Mining Company, mined the Kearsage Lode, a deposit of amygdaloid copper that was mined by various companies from 1882 until 1925. A longitudinal section of the mines on the Kearsage Lode is situated on the upper left, just below an insert of a geological section of the copper range at Calumet.

The township grid used by the Public Land Survey System is overlaid on the map, with every township in the region illustrated and numbered, along with all the sections. Some sections are even further divided into quarters and even lots. Rivers and lakes are illustrated and labeled as well, along with bays and harbors along Lake Superior. An inset map situated in the lower right corner illustrates the copper range in Ontonagon County in the same manner as the larger central map.

This map was compiled and drawn by Richard M. Edwards of Houghton, Michigan and published by E.P. Noll and Company in 1905. Several different editions of this map were published, with the current 1905 example being among the scarcest. We have been able to locate three examples in institutional collections at the University of Michigan, the University of Texas at Arlington, and the Huntington Library.

Richard M. Edwards (1864 - June 11, 1942) was an American mining engineer. Born in Michigan, Edwards attended the Columbia School of Mines in New York, New York and graduated in 1886. Upon graduation, Edwards began working for the mining companies of Stephen R. Dow and Company in the Lake Superior district of Michigan. Edwards also held a teaching position at the Houghton College School of Mines in Houghton, Michigan following graduation until 1889. Two of the mining companies he worked for are the Tamarack Mining Company and the Isle Royale Copper Company. Edwards married in 1893. Learn More...