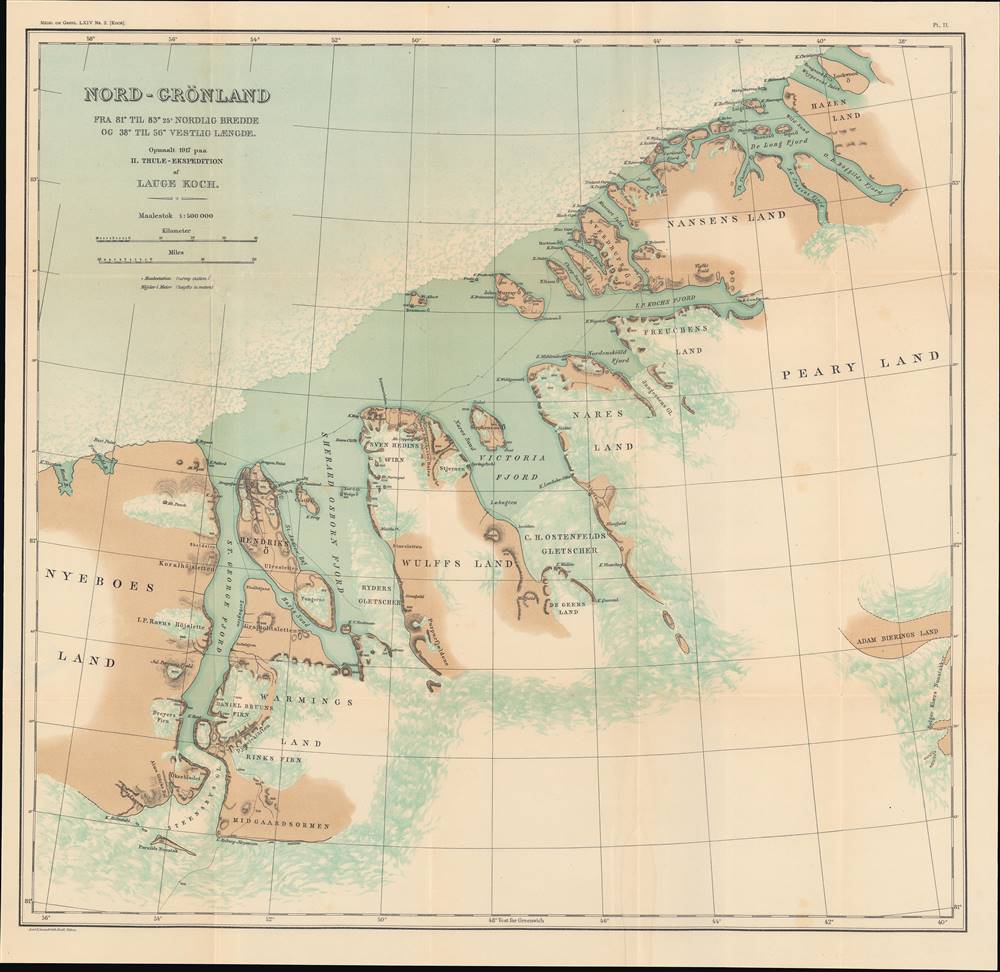 This is a very rare 1922 map of northern Greenland by Lauge Koch. Koch participated in the Second Thule Expedition (Knud Rasmussen; 1916 - 1918), an important achievement in the history of polar exploration. It details the route of the expedition, undertaken in 1916 – 1918, and the surrounding geography, much of it mapped for the first time.

The full title of the map is Nord-Grönland : fra 81° til 83° 25' nordlig bredde og 38° til 56° vestlig længde opmaalt 1917 paa II. Thule-Ekspediton af Lauge Koch,' meaning 'North Greenland: from 81° to 83° 25' north latitude and 38° to 56° west longitude measured 1917 on II. Thule-Expedition by Lauge Koch.' The dotted line illustrates the progress of the expedition, roughly from southwest to northeast, to its furthest extent at the De Long Fjord. Elevation is indicated at several points. The uncertainty over the surrounding land and coastline is evident with the large blank space and the inclusion of bits of known geography further to the east ('Adam Bierings Land,' and ' Holger Kiærs Nunatakker'), which had been discovered on the First Thule Expedition (1912). The lands shown are now part of the Northeast Greenland National Park, the largest national park in the world.

The Great Age of Polar Exploration

Despite the extreme cold, there are archaeological remains of indigenous settlements in northern Greenland dating back over 4,000 years. Ships from the European continent reached northern Greenland in the early 19th century (with the British expedition led by John Ross), and interest in Northern Greenland increased in the late 19th century as various nations sent expeditions to reach the North Pole. The American explorer and naval officer Robert Peary led an expedition that was likely the first to reach the North Pole in 1909 (there is some dispute over this), and here a large peninsula is already been named for him. As Greenland was (and still is) a part of Denmark, many of the explorers and cartographers of Greenland in the great age of polar exploration were Danish, including the 1907 'Denmark Expedition' who tragically died while exploring and mapping the fjords of northeast Greenland.

Thule was the northernmost point mentioned in ancient Greek and Roman texts, and may have referred specifically to a point in the Shetland Islands, or off the coast of Norway or Estonia. The name was repurposed by Knud Rasmussen, a Danish explorer, for a trading post and base for Arctic expeditions located in the modern town of Qaanaaq in northwest Greenland, one of the world's northernmost settlements. Rasmussen was born on Greenland of mixed Danish and Inuit heritage and grew up in the company of Kalaallit Inuit people, learning their language and customs. He led several expeditions from Thule, ranging over thousands of kilometers (even all the way to Nome, Alaska) and collecting important ethnographic and archaeological data on indigenous peoples in the Arctic.

This map appeared in Meddelelser om Grønland (Monographs on Greenland), Vol. 64, No. 2 (1922), published by the Kommissionen for Videnskabelige Undersøgelser i Grønland (Commission for Scientific Studies in Greenland). It was made by Lauge Koch and lithographed by Axel E. Aamodt, a Copenhagen-based publisher. Although cataloged in the OCLC, the map is not known to belong to any institutional holdings and has no known history on the market.

Lauge Koch (July 5, 1892 – June 5, 1964) was a Danish cartographer, geologist, and Arctic explorer. Koch developed an interest in Greenland and Arctic exploration from a young age and spent his career as a member or leader of numerous Artic expeditions while also earning a doctorate in geology. Learn More...


Axel E. Aamodt (fl. c. 1857 – 1966), often written as 'Axel E. Aamodts,' the full name being Axel E. Aamodts Lithografiske Etablissement, was a Copenhagen-based publisher, primarily of maps. It was granted a royal warrant as a List of Purveyor to the Court of Denmark and perhaps most famously produced the maps for the Danish-language encyclopedia Salmonsens Konversationsleksikon. Learn More...