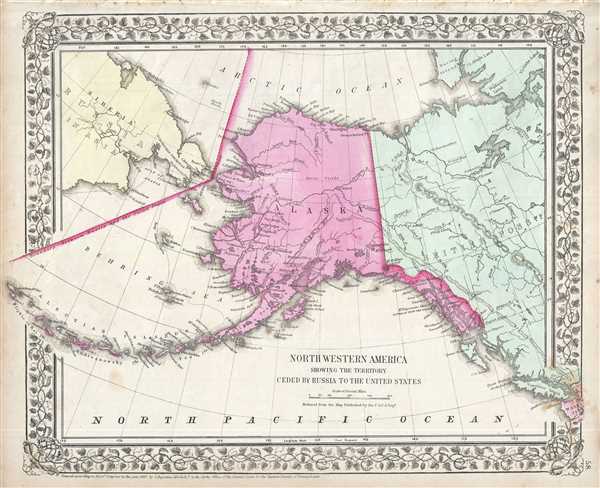 Map of Alaska from the year it was ceded by Russia to the United States.

This is a beautiful hand colored 1867 map of Alaska by the American map publisher S. A. Mitchell Jr. It covers the territory ceded by Russia to the United States (modern day Alaska) and neighboring regions. Color coded according to county and territory. Shows various geographic features, bays, mountains, rivers, as well as providing details on towns, and other political data.

Issued in 1867, the same year Alaska was purchased by the United States from Russia, this is one of the first map to depict the United States territory. Features the vine motif border typical of Mitchell maps from the 1865-80 period. Prepared for inclusion as plate 58 in the 1867 issue of Mitchell's New General Atlas. Dated and copyrighted, 'Entered according to Act of Congress in the Year 1867 by S. Augustus Mitchell Jr. in the Clerk's Office of the District Court of the U.S. for the Eastern District of Pennsylvania.