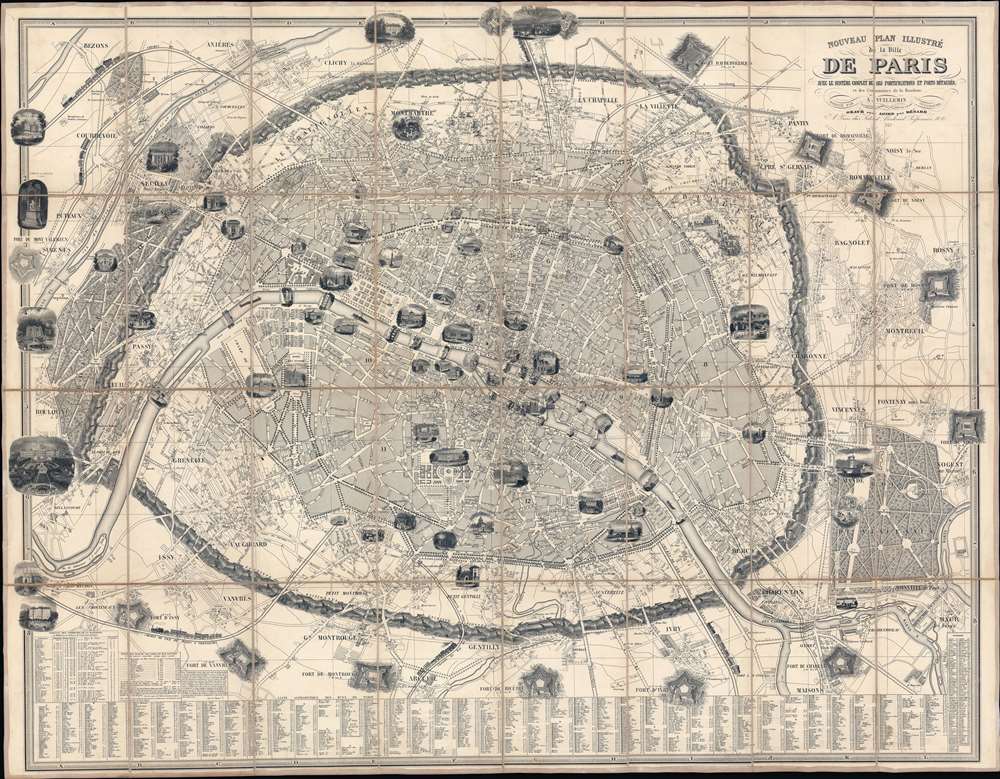 This is an 1849 Alexandre Vuillemin pictorial city plan or map of Paris, France. Pictorial views highlight Paris's many spectacular monuments, including the Louvre, the Place de la Concorde, the Arc de Triomphe, les Invalides, Notre Dame, and the Panthéon. Streets throughout the city are illustrated and labeled, along with numerous other sites not illustrated with views. Each arrondissement is labeled as well.

The map's most striking feature is its bold pictorial depiction of Paris's city walls, the Theirs Wall. This map exhibits the Theirs Wall shortly after it was completed in 1844. Shocked seizure of Paris by foreign enemies during the 1814 Battle of Paris, the French King at the time, Louis-Philippe (1830 - 1848), conceived of a board network of walls and forts he believed would make Paris impregnable. The project was met with immediate opposition, some of which claimed that the walls were not defensive, but rather intended to control Parisians in the event of an anti-monarchal rebellion. Nonetheless, under a plan prepared by Marshal General Jean-de-Dieu Soult (1759 - 1861), construction began in 1841. The completed fortifications, named the Thiers Wall after the French Prime Minister at the time, Adolphe Theirs (1797 - 1877), were completed at enormous expense in 1844. The walls were 33 kilometers long and consisted of 94 bastions, 17 gates, 23 minor road crossings, and eight railroad gates. By 1919, advancements in military technology made the walls obsolete, leading them to be fully deconstructed by 1929 and replaced with the Boulevard Périphérique. People are illustrated throughout in the shadow of the walls, highlighting the wealth disparity between those living in central Paris and those outside its walls.

This map was created and published by Alexandre Vuillemin in 1849. Four examples are cataloged in OCLC and are part of the institutional collections at the Universitätsbibliothek Erlangen-Nürnberg, the Bayerische Staatsbibliothek in Munich, the Boston Athenaeum, and the Bibliothèque nationale de France.


Jacques-Alphonse Testard (1810 - 18xx) was a French artist and engraver active in Paris during the mid- and late-19th century. He is credited with more works as the artist than as the engraver. Learn More...

Good. Dissected and mounted on original linen in thirty-two (32) panels. Fold separations to the linen reinforced on verso. Blank on verso.