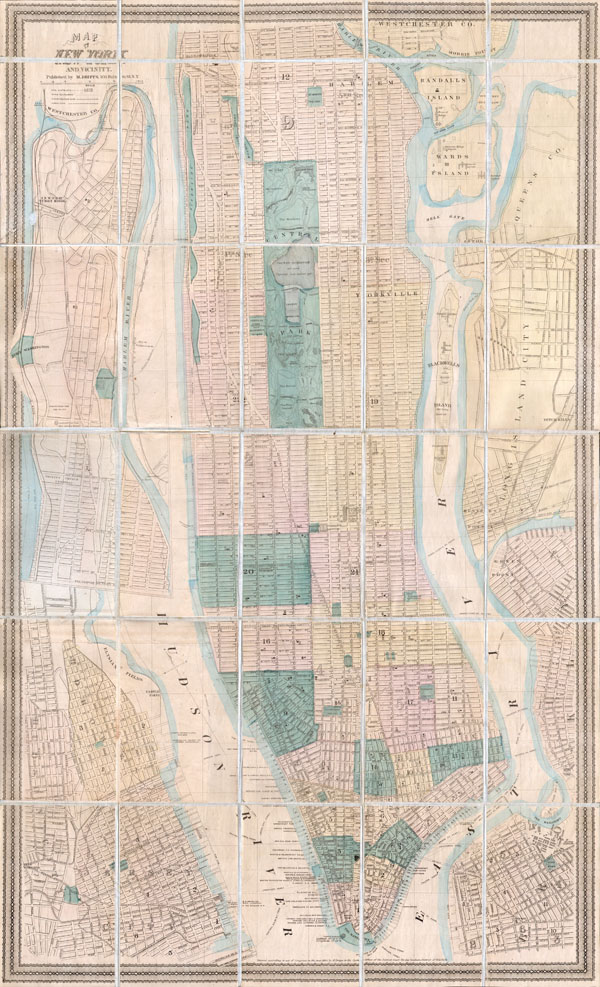 This is a rare pocket map of New York City by M. Dripps. Covers the entire island of Manhattan as well as parts of Brooklyn, Queens, Hoboken and Jersey City. Shows the city in considerable detail with all streets and, in Manhattan, block numbers clearly shown. Labels most of the peers in lower Manhattan and shows numerous individual buildings with identifying numbers. Where Columbia University now stands, this map reveals a 19th century Lunatic Asylum. In Queens, labels Hunters Point and shows the beginnings of the Long Island Railroad. Dated 1973 under the title, but the copyright at the bottom center reads, 'Entered according to Act of Congress in the year 1865 by M. Dripps in the Clerks Office of the District Court for the Southern District of New York'

This map was popular throughout the mid to late 19th century when it was commonly issued folded into with Valentine's Manual of the Common Council of New York. This map, however is a rare independent issue. Unlike the Valentine variations, our map is bound into its own special binder. The map is dissected and mounted on linen in 30 sections for easy folding. Ultimately this is an unusual and very difficult to find variant on an important 19th century New York Map.