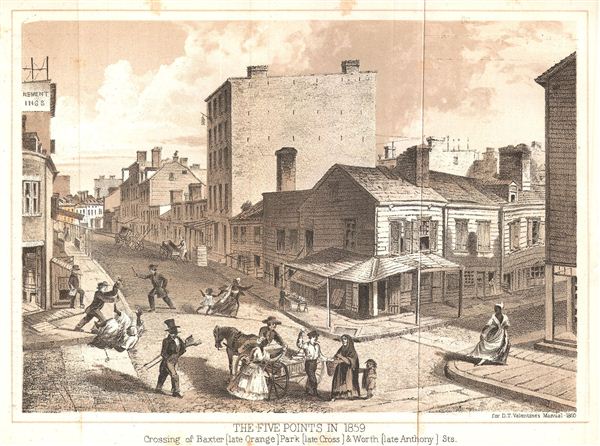 An exquisitely detailed view of New York City's Five Points slum in 1859, showing the crossing of Baxter, Park and Worth, (Orange, Cross and Anthony Streets). The drawing is done from street view and hints at the slum-like conditions of the area at the time: the decrepit condition of some of the housing, a man pushing a woman into the street, and a policeman raising his baton, among other figures.

The Five Points was a slum located in the Columbus Park area of Chinatown on New York City's Lower east Side, bounded by Centre Street in the west, The Bowery in the east, Canal Street in the north and Park Row in the south. The ‘Five Points' got its name from the corners created by the intersection of Orange (now Baxter), Cross (now Mosco), and Anthony Streets (now Worth)—with Anthony stopping at the intersection without crossing, hence five rather than the six corners that would normally be formed by three streets fully intersecting. The area was a notoriously dangerous and disease-ridden slum, of which Charles Dickens wrote in 1842:

What place is this, to which the squalid street conducts us? A kind of square of leprous houses, some of which are attainable only by crazy wooden stairs without. What lies behind this tottering flight of steps? Let us go on again, and plunge into the Five Points.

Some estimate that one in every three women in the neighborhood was involved in some form of sex trade. The Old Brewery, which housed a motley collection of revolving squatters, was said to have a murder a night for 15 years until it was torn down in 1852.

To the west of Anthony's ‘fifth point' ran Little Water Street (which no longer exists) north to south, creating a triangular plot known as Paradise Square or Paradise Park, recently (re)made famous as the location of the opening gang war in Martin Scorsese's period epic The Gangs of New York. The film was based in part on Herbert Asbury's book of the same name, along with Luc Sante's Low Life, both brimming with fantastically described scenes of degradation, of a New York of only 150 years ago so violent it has no comparison in any city in the world today.

, published as one of two Five Points views in D.T. Valentine's Manual of the Corporation of the City of New York 1860.