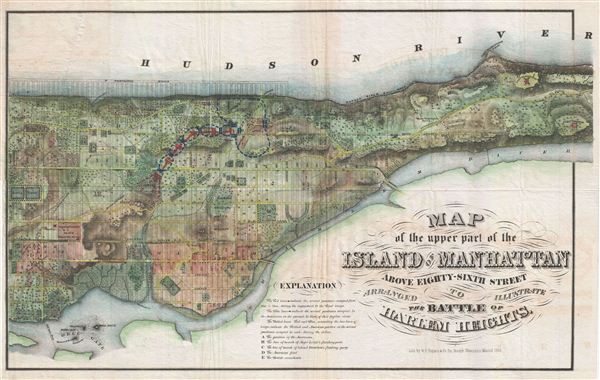 A stunning and rare 1868 map of the northern part of the island of Manhattan, New York city by W. C. Rogers. The map depicts the upper part of Manhattan, above 86th street (including Morningside Heights, Manhattan Valley, Harlem, Inwood, the Upper West Side, the Upper east Side, etc...) in extraordinary detail, depicting streets, buildings, estates and in many cases individual trees. This map is most certainly based upon the 1836 Topographical Map of the City and County of New York drawn by David H. Burr and published by J.H. Colton. Colton’s map was perhaps the ‘finest example of artistic mapmaking applied to the Island of Manhattan’ (I.N. Phelps Stokes). This map uses only the northern portion of Colton’s map, but features the same stunning detail. It has been beautifully hand colored to illustrate the Battle of Harlem Heights. This is the finest map to specifically detail northern Manhattan of which we are aware.

Shannon commissioned this map to illustrate the events leading to the British takeover of New York City and vicinity during the American Revolutionary War. Specifically, it details the Battle of Harlem Heights and the Battle of Long Island. In 1776 the British General William Howe, fleeing Boston, regrouped and landed his forces on Long Island and Staten Island. After defeating George Washington at the Battle of Long Island, Howe seized control of New York City and most of Manhattan. A series of subsequent skirmishes culminated in the Battle of Harlem Heights, in what is now Morningside Heights, New York City. Washington controlled the highlands and galvanized his troops to a strong defense, holding the heights against superior British numbers and firepower. Nonetheless, the position proved untenable and Washington and his forces retreated northward to Westchester County. Howe, keen to seize the advantage, landed troops in Westchester, a flanking maneuver intended to encircle Washington’s forces. Washington, alerted to the tactic, entrenched himself in White Plains, but was unable to hold against Howe’s forces. Howe proceeded to drive Washington across New Jersey into Pennsylvania where he famously crossed the Delaware on December 26th to surprise a brigade of Hessian mercenaries in the Battle of Trenton – a strategic Continental victory and major turning point in the war.

Prepared for inclusion in the 1868 edition of Joseph Shannon’s Manual Of The Corporation Of The City of New York. An important piece for collectors of New York City cartography.