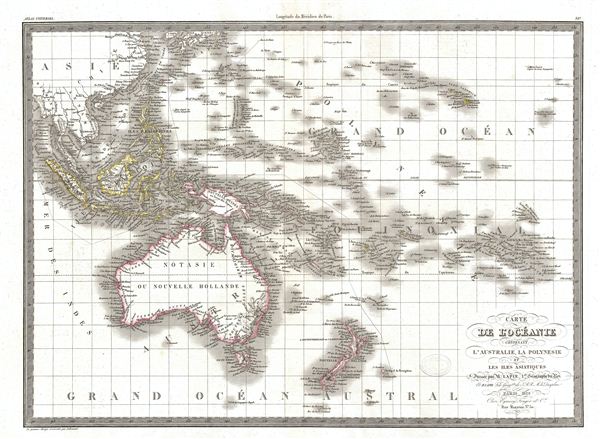 A fine first edition example of M. Lapie's 1830 map of Australia, New Zealand, Polynesia, and the east India Islands. This map covers from Southeast Asia eastward as far as the remote Polynesian islands of elisabeth and Henderson, and from Japan Southwards to include all of Australia, Tasmania, and New Zealand. The map identifies countless islands throughout Polynesia including the major archipelagos: the Marquesas, the Friendly Islands the Sandwich Islands (Hawaii), Tahiti, New Hebrides, and the Solomon Islands.

This map was engraved by Armand Joseph Lallemand as plate no. 38 in the first edition of M. Lapie's important Atlas Universel. This map, like all maps from the Atlas Universel features an embossed stamp from the Lapie firm.