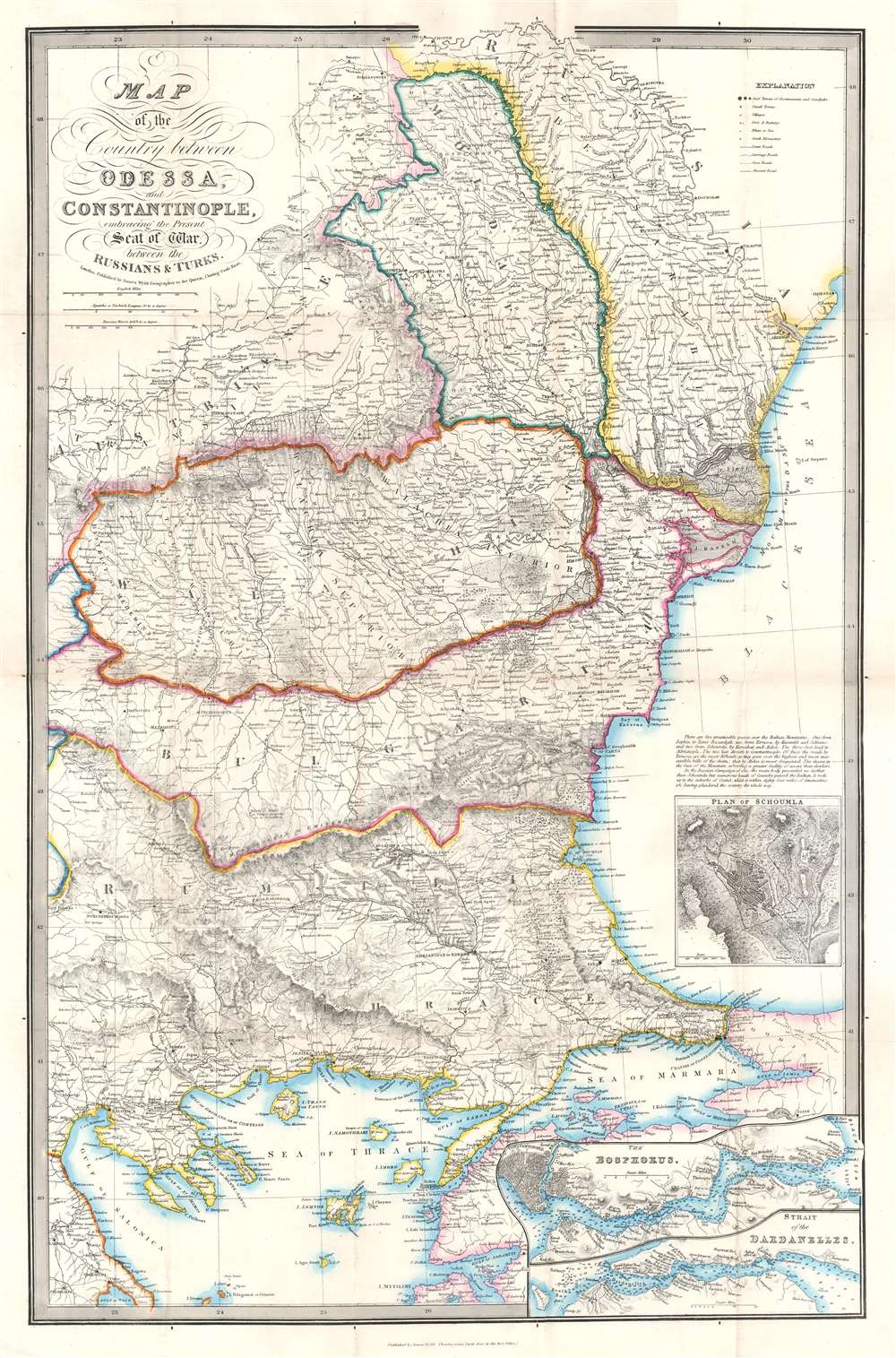 Depicts the theater of war at the beginning of the Crimean War.
$950.00

This is an 1854 James Wyld map of the eastern Balkans and the Black Sea coast during the Crimean War. The map depicts the region from Salonica to Odessa, and from the Dnister (Dniester) River to the island of Lesbos (I. Mytilini) in the Aegean Sea. Published in the middle of the war, Wyld presents the theater of war, highlighting the two regions first occupied by the Russian Empire (Wallachia and Moldavia) and allowing his viewers a better understanding of the news they were receiving from their armies in the Balkans.

Highly detailed, myriad cities, towns, and villages are labeled throughout, including Odessa, Adrianople, Salonica, Gallipoli, and Constantinople. Topography is also noted, with chains of hills and mountains indicated by hachure and rivers and streams meandering their way to the sea. Three different grades of roads are marked from 'great roads' to 'carriage roads' and finally to 'cross roads'. Ancient roads are also noted. Forts and batteries, Greek monasteries, and inns are also marked. Various colors are used to highlight regional boundaries, with Moldavia, Austria, Bessarabia, Walachia, Bulgaria, and Rumili among those identified. A brilliant blue sets apart the regional seas, as well as the Bosporus (Bosphorus) and the Strait of the Dardanelles in two inset maps situated in the lower right corner. A plan of the town of Schoumla is situated along the right border. This city, located along two mountain passes through the Balkan Mountains, was an important site in the Crimean War, which was raging at the time of this map's publication. Per the map, only five practicable passes over the Balkan Mountains existed at this time, and the two routes through Schoumla led directly to Constantinople, the capital of the Ottoman Empire.

Now, public opinion at home, where discontent at the seemingly wasted effort and expense of sending armies to the Balkans, exerted an influence on the alliance. This outcry led to the planning and execution of an invasion of the Crimean Peninsula in September and a siege of the Russian naval port of Sevastopol, their primary naval base in the Black Sea, which lasted for eleven months. Russia finally sued for peace in March 1856 and in the Treaty of Paris the ended the war Russia lost its Black Sea ports, Wallachia and Moldavia gained a modicum of independence, and Christians in the Holy Land were given a degree of equality.

This map was created and published by James Wyld in 1854. The OCLC records examples as being part of the collections at Yale University, Harvard University, and the British Library.