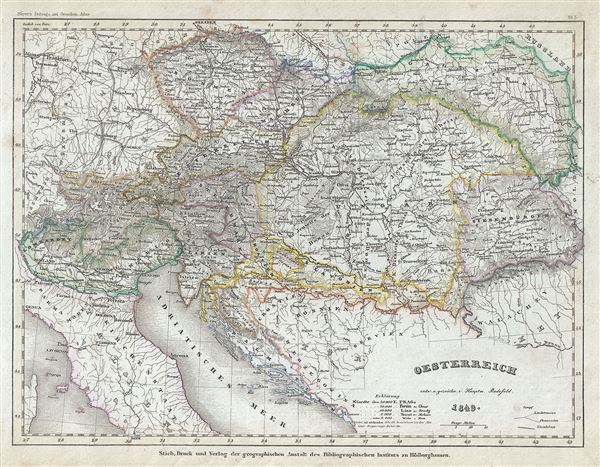 This is an attractive 1849 map of Austria by Joseph Meyer. It covers the territories claimed by the once vast Austrian Empire, including in whole or part the modern day nations of Austria, Hungary, Italy, Germany, Albania, Croatia, Romania and the Czech Republic. Throughout the map identifies roads, rivers, towns, cities, mountains and other important topographical features.

The Austrian empire, founded in 1804 by the last Holy Roman Emperor, Francis II, lasted only till 1866. It was transformed into the Austro-Hungarian Empire after Austria was defeated in the Austro-Prussian War of 1866.

This map was issued as plate no. 3 in Meyer's Zeitung Atlas. Although all the maps in this atlas are not individually dated, the title page and maps were often updated while the imprint with the date was not, causing confusion to the exact date for some of the maps. Moreover some maps in the atlas were taped in at a later date as an update to the atlas. We have dated the maps in this collection to the best of our ability.