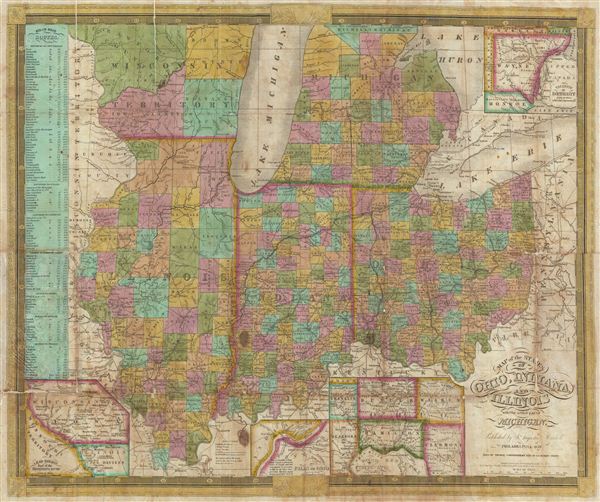 A scarce 1839 S. A. Mitchell pocket map depicting the states of Ohio, Indiana, Illinois, and Michigan. Insets include, 'Vicinity of Detroit,' 'Vicinity of Cincinnati,' 'Falls of Ohio,' 'Lead Region East of the Mississippi.' A chart on the left-hand side of the map details steamboat routes from: Pittsburg to New Orleans, Louisville to St. Louis, Louisville to Lafayette, St. Louis to Prairie du Chien, St. Louis to Peoria, Buffalo to Detroit, Detroit to Chicago. Dated and copyrighted 'Entered according to Act of Congress in the year 1834 by S. Augustus Mitchell in the Clerk's office of the district court of the eastern district of Pennsylvania.'

Good condition. Professionally flattened and backed with archival tissue. Removed from but sold with original binder.

Karpinski, Maps of Michigan, 126
Looking for a high-resolution scan of this?