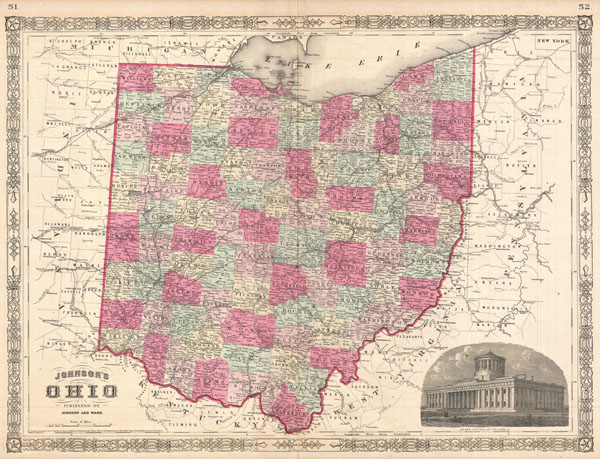 This is A. J. Johnson's beautifully hand colored first edition 1864 map of Ohio. This map shows cities, topographical features, railways, ferries and roads with color coding at the county level. Johnson introduced this large folio map in the 1864 edition of his atlas, replacing the single page Ohio map that he inherited from Colton. The expanded map was necessary to account for the boom in Ohio's population that occurred in the previous decade. An engraved view of the Columbus state house appears in the lower right quadrant. Features the fretwork style border common to Johnson's atlas work from 1863 to 1869.

Published by A. J. Johnson and Ward as plates 50-51 in the 1864 edition of Johnson's New Illustrated Family Atlas. This is the first edition of the Johnson's Atlas to bear the Johnson & Ward imprint and the only edition to identify the firm as the 'Successors to Johnson and Browning (Successors to J. H. Colton and Company).' Dated and copyrighted, 'Entered according to Act of Congress in the Year 1864 by A. J. Johnson in the Clerks Office of the District Court of the United States for the Southern District of New York.'

Very good condition. Wear and verso reinforcement along original centerfold. Text on verso. Minor foxing and overall toning.
Looking for a high-resolution scan of this?