1861 Johnson Map of Ohio and Indiana 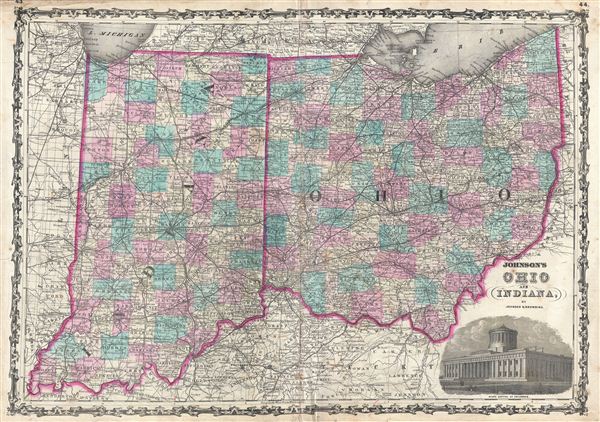 1861 Johnson Map of Ohio and Indiana

This is a beautiful example of A. J. Johnson and R. Browning's 1861 map of Ohio and Indiana. It covers both states divided into counties with special attention to transportation, especially roads, railroads, and canals. There is an engraved view of the Ohio State Capitol Building at Columbus in the lower right quadrant. Several towns, cities, rivers, and various other topographical details are noted. This map features the strapwork style border common to Johnson's atlas work from 1860 to 1863. Published by A. J. Johnson and Browning as plate nos. 43 and 44 in the 1861 edition of Johnson's New Illustrated Family Atlas. This is the last edition of the Johnson Atlas to bear the 'Johnson and Browning' imprint. Subsequent editions reflect Ward's 1862 acquisition Ross C. Browning's shares in the firm.

Good. Typical age wear and verso repair along original centerfold. Overall toning and some foxing. Narrow margins with verso repair near margin. Blank on verso. Erased pencil marks along margins.
Looking for a high-resolution scan of this?