1824 Tanner Map of Ohio and Indiana 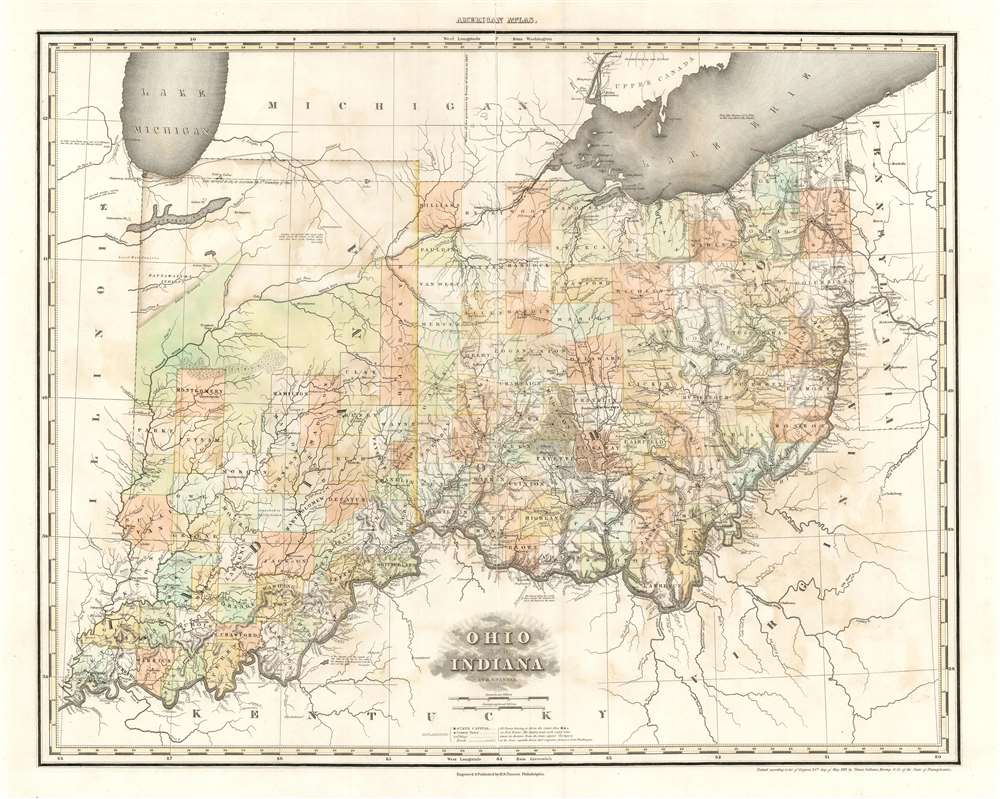 1824 Tanner Map of Ohio and Indiana

Rare Transitional State Chronicling the Aftermath of the 1818 Delaware's Cession.
$2,500.00

A rare and important map of Ohio and Indiana by Henry S. Tanner, in a transitional state between the 1823 and 1825 editions of his New American Atlas. This elephant folio map covers all of Ohio and Indiana in detail, as well as sketching in adjacent parts of Michigan, Illinois, Kentucky, Virginia and Pennsylvania. The map is a strong example of Tanner's superb engraving, showing rivers, topography by hachure, cities, towns and roadways.

The copyright on this map, is May 24, 1819; this is the date found on this map in the later issues of 1825 and 1833 as well. This example appeared in an 1823 edition of the New American Atlas. The plate, nonetheless, differs sharply both from other 1823 and 1825 examples (compare with Rumsey's examples of these years), and contextual details suggest that this revised map was executed in 1824.

Between the first issue of this map and this example, dozens of place names have been added: towns, villages, rivers, creeks and even individual farms appear on this map that are absent on the 1823 first state. (A few that appear on the 1823 are removed as well!)

The Northwestern Counties of Ohio

Some of the most drastic changes in Ohio take place in the counties west of Sandusky Bay. Henry, Wood, Sandusky, Seneca, Crawford and Marion counties are shown on the 1823 as marshy and uninviting; here the swamplands are expunged. Fort Stephenson - the site of a rare American victory in the war of 1812 - has also been added. These counties were largely the result of February 1820 treaties and purchases from Native American tribes, notably the Wyandot Nation. Mercer County on the earlier state marks the presence of 'Miami Indians' and includes a note that

During the spring floods, canoes pass from the Miami to the Wabash and thence into Maumee River.

On the updated state of the map, these references are removed. Mercer county itself would not officially exist until January 1824, so it is likely that this map dates to 1824 despite its older copyright.

The Cession of Indiana

The sharpest distinctions between the first state of this map, and this example is the explosion of European settlement in Indiana. The 1823 issue of this map explicitly refers to the 1818 'Delaware's Cession,' or the Treaty of St. Mary's. Actually six separate treaties between the United States and nine Native American Nations (including the Delaware), The 'Delaware Cession' resulted (in the area covered by this map) in the cession of Wea Indian claims to all lands in Ohio, Indiana, and Illinois, the cession of Miami lands south of the Wabash, a tract consisting of the entire central portion of Indiana.

Illustrating the Occupation of Indiana

The 1823 map still shows, in most of Indiana north of Franklin and Vigo counties, Native American territory with the tribal names of the Miamis, Kickapoo, Shawnee, and Pattawatima Nations. This 1824 state of the map marks an 'Indian Boundary' some twenty-five miles northwest of the Wabash River, with tribal names much fewer, and reduced in extent. Meanwhile, a dozen new counties have been formed south of the Wabash, pushing ever northwards. Even descriptions of the land have been changed: On the 1823, the land south of the Wabash is described thus: