1825 Tanner Map of Ohio and Indiana 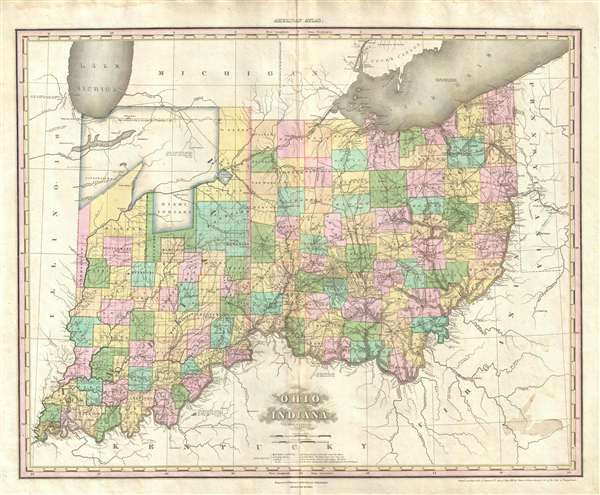 1825 Tanner Map of Ohio and Indiana

An important perspective on American Indian territory in Ohio and Indiana before the Treaty of Mississinwas forced the Miami of their traditional lands.
$2,000.00

A rare and important map of Ohio and Indiana by H. S. Tanner. This elephant folio map covers all of Ohio and Indiana as well as, in less detail, adjacent parts of Michigan, Illinois, Kentucky, Virginia and Pennsylvania. The map shows rivers, topography by hachure, cities, towns and roadways.

Tanner maps are highly desirable for their unique perspective on American geography from a period of rapid westward expansion, particularly with regard to American Indian lands. Here the map shows American Indian territory dominating the northwestern part of the state, particularly the Patawatima Reserve, and just south of Chicago and the Miami Territory, slightly further east. It is of note that this map was issued in 1825, one year before the Treaty of Mississinwas, signed in 1826, which forced the Miami to cede most of their land to the U.S. Government. It also allowed Miami lands to be held as private property by individuals, where the tribe had formerly held the land in common.