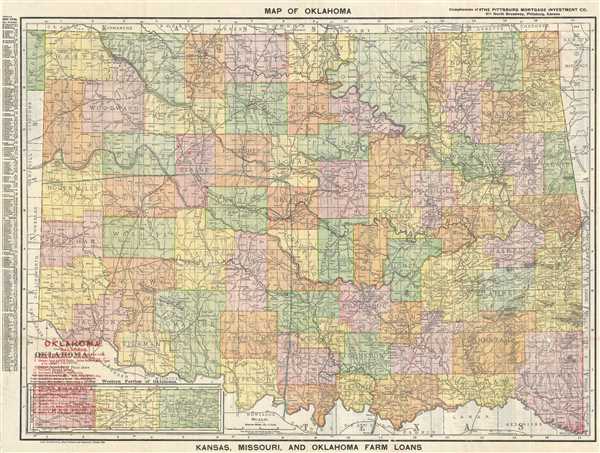 This is a 1909 Rand McNally railroad map of Oklahoma. The map depicts the state of Oklahoma from New Mexico and Texas to Arkansas and Missouri and from Kansas to Texas with the majority of the panhandle depicted in an inset map at the lower left. Counties are labeled and differentiated by different colors. An index of chief cities in Oklahoma, organized by population, is located along the left margin.

Curiously, an index of Oklahoma railroads appears to have been overprinted on this example. 19 different railroads are numerically identified throughout the state, with numbers overprinted throughout the state marking the routes of the different railroads. The index is located in the lower left corner, although its use is limited because the printing is not easily legible. Also, a large portion of southwestern Oklahoma is blocked off in what appears to be colored pencil. We have no idea what to make of this notation. Thus, while the Rand McNally plates were used for the general map, there is much more information here than is present on a standard Rand McNally.

This map was created By Rand, McNally and Company of Chicago in 1908 and updated in 1909. This example was distributed by The Pittsburg Mortgage Investment Company of Pittsburg, Kansas.

Very good. Backed on archival tissue for stability. Text on verso.
Looking for a high-resolution scan of this?