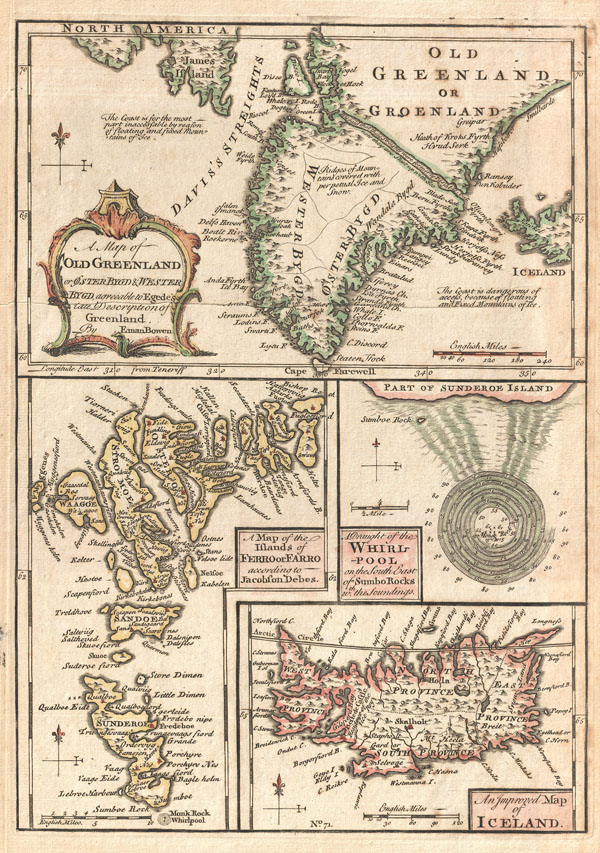 A Map of Old Greenland or Oster Bygd & Wester Bygd, agreeable to Egede’s late Description of Greenland. A Map of the Islands of Ferro or Farro according to Jacobson Debes. A Draught of the Whirlpool on the South East of Sumbo Rocks w.th the Soundings. An Improved Map of Iceland
1747 (undated)     13 x 9 in (33.02 x 22.86 cm)

A singularly fascinating 1747 map of Greenland, Iceland and the Faroe Islands by E. Bowen. Essentially four maps on one sheet, this map of the North Atlantic islands is festooned with speculation and curiosities.

The uppermost map is based on reports by the priest Hans Egede and shows the southern portions of Greenland as well as parts of Iceland and James Island. When this map was drawn the coasts of Greenland were fairly well mapped out by Icelandic and Scandinavian whalers, but the interior was largely unknown. There was some speculation in the early 17th and 18th centuries that a water passage existed through Greenland providing easy access to Iceland from the Davis Straights. Our map notes the passage but also comments that it is now impassable due to ice. Bowen also notes that the seas on either side of the Island are treacherous due to 'mountains of Ice.'

The Faroe Islands have been historically treacherous for mariners due to the unpredictable currents and tides surrounding them. One of the most curious and legendary results of these currents is the great maelstrom that once roared at the southern tip of Sunderoe (today Suouroy Island) - depicted on our map at the right center. This mighty whirlpool swirled around a sheer pinnacle of rock called Monek, which was said to resemble a monk from one side and a sailing ship from the other. Reports say that the whirlpool was over a mile in diameter. Soundings show that the waters surrounding the whirlpool had a depth of some 80 to 90 fathoms, but that the waters nearer the rock, at the center of the maelstrom, were but 7 to 10 fathoms deep. Sadly this startling natural phenomenon is no more. In 1884 much of Monek Rock crumbled into the sea, creating a dangerous underwater reef and displacing the unique convergence that created the maelstrom.

In the lower right hand corner of our chart is a map of Iceland. Iceland had been fairly well mapped since the late 16th century. This map, updated from earlier maps, shows the royal residence and four primary provinces.