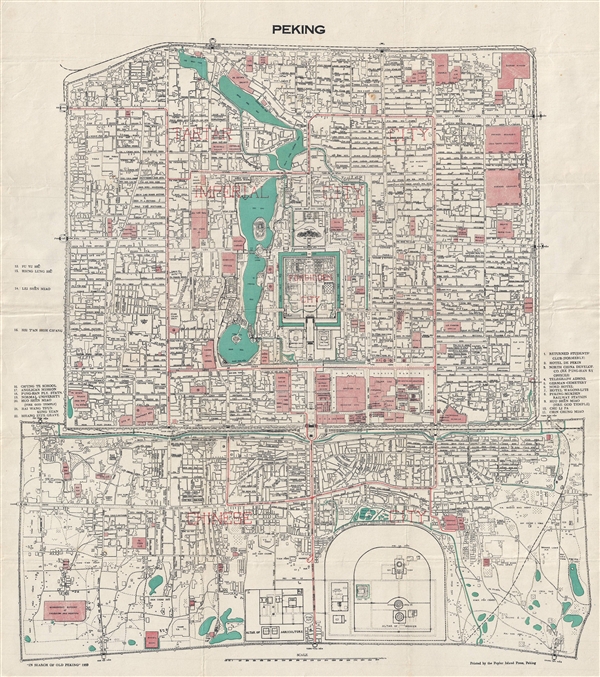 One of the better English language maps of Beijing, published in Beijing, during World War II.

An unusual 1939 map of Beijing or Peking, China, published by the Poplar Island Press, in Beijing. This map covers the old walled city of Beijing in considerable detail with many of the Chinese street names transliterated into phonetic English. Some 20 important locations, including schools, railway stations, graves, missions, and temples, are identified numerically. Hundhausen published this map shortly after his expulsion from Peking University by Nazi sympathizers.

Poplar Island Press (杨树岛, fl. c. 1930 – c. 1950) was a Beijing based printer and publisher active in the first half of the 20th century. The press was owned by Vincenz Maria Hermann Hundhausen (1878 - 1955), a German who was a German-language professor working at Peking University. Hundhausen operated Poplar Island Press out of his estate, called Poplar Island, located in Beijing just west of the old city wall. The press was initially founded as venue for publishing Hundhausen's own poetic works but eventually grew to become a large private publishing concern in Pre-war China. Hundhausen remained in China throughout World War II despite loosing his university position due to Nazi influences in the administration. Hundhausen took advantage of his own influence in the university system to take over the Peking University Press, with which he expanded his own business ultimately publishing several hundred cultural works. China ultimately expelled him in 1954. He died one year later in Grevenbrioch, Germany. Learn More...

Very good. Minor verso reinforcement at some fold intersections.
Looking for a high-resolution scan of this?