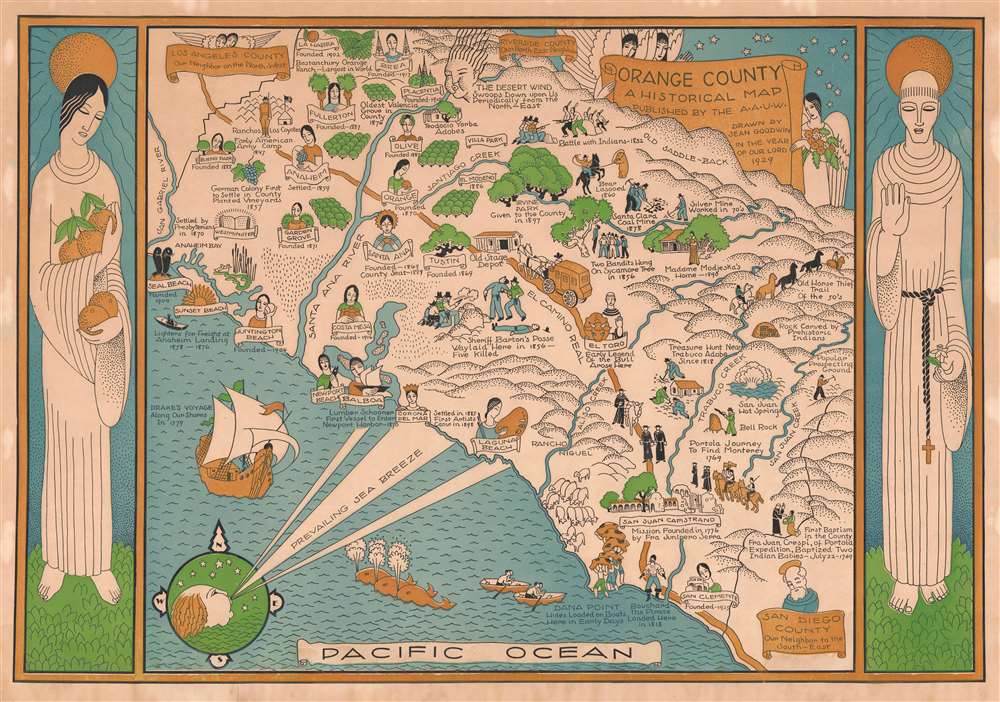 A product of the Golden Age of American Pictorial cartography, this is a rare and spectacular Jean Goodwin 1929 Art Deco pictorial map of Orange County, Los Angeles metro area, California. The map is divided triptych-style into three 'panels': the left panel is a personification of California, arms full of oranges; a map of Orange County occupies the primary central panel; and at right a Franciscan friar references regional influence of early Franciscan Missions. Female portraits, bearing a resemblance to 'California' on the left, mark cities and towns including Huntington Beach, Anaheim, Brea, and Laguna Beach. Alternative iconography marks other towns, such as two seals for Seal Beach, or a sunset for Sunset Beach. Pictorial vignettes throughout celebrate California's history. An American soldier marks Ranchos Los Coyotes, an early American army camp from 1847. A stagecoach rumbles along the El Camino Real, and miners hunt for coal and silver in the county's hilly terrain. A 'golden' title cartouche flanked by three angels occupies the upper right section of the central 'panel'.

Jean Goodwin Ames (November 5, 1903 - February 13, 1986) (née Jean Goodwin) was an American artist, muralist, painter, ceramicist, and sculptor. Born in Santa Ana, California, Ames studied art at the Art Institute of Chicago before earning a Bachelor of Arts degree in education from the University of California, Los Angeles in 1931. After graduating she taught art at Citrus High School and Junior College from 1933 until 1936. She earned an MFA from the University of Southern California (USC) in 1937. During her time at USC, she became interested in murals and mural decoration. She also met her future husband, Arthur Ames, in a night ceramics class at USC. The creation of a majolica tile mural in the lobby of the Science building at USC served as her master's thesis. Jean and Arthur often collaborated over the course of their careers, including on several murals for the Works Progress Administration. It was during their time working for the W.P.A. that Jean and Arthur became some of the first artists in California to use mosaics. Over the course of her career, Jean created tapestries and mosaics that decorate buildings throughout Southern California. Jean became a faculty member at Scripps College and Claremont Graduate School in 1940 and remained there until she retired in 1969. Jean served as Chair of the Art Department at the Claremont Graduate School from 1962 until 1969, when she was made a Professor Emerita. Learn More...


The American Association of University Women (AAUW) (1881 - present) is an American non-profit organization that advocates for equality for women and girls through advocacy, education, and research. Founded in 1881 in Boston by Marion Talbot and Ellen Swallow Richards, that AAUW now has over 170,000 members and supporters, 1,000 branches, and 800 college and university partners. Originally known as the Association of Collegiate Alumnae, the AAUW has participated in many campaigns advocating for women. In 1887, a fellowship was created to support women's education. The organization donated money to the campaign to purchase a gram of radium for Marie Curie in 1919. During World War II, the AAUW worked to support displaced female scholars and began raising money on their behalf. Today, the AAUW sponsors many different programs and still supports women's education through scholarships, grants, fellowships, and other awards. They also support research, STEM education, and leadership initiatives. Learn More...

Very good. Even overall toning.
Looking for a high-resolution scan of this?