1865 Spruner Map of the World under the Assyrian Empire 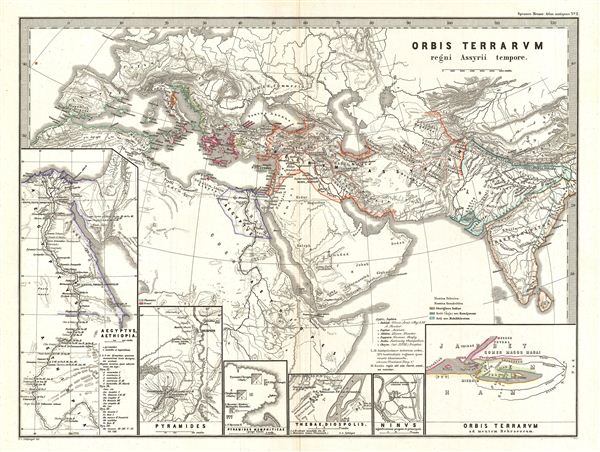 1865 Spruner Map of the World under the Assyrian Empire

This is Karl von Spruner's 1865 map, Orbis Terrarum Regni Assyrii Tempore, or, The World at the Time of the Assyrian Empire. The map features six inserts: (from left to right) Egypt and Ethiopia, the Pyramids, The Pyramids at Memphis (Gaza), Thebes, Nineveh, with particular focus on the capital, and the world as known to the Hebrew peoples. Map focuses on modern day Egypt, Ethiopia, Somalia, Turkey, Saudia Arabia, Iraq, Iran, Afghanistan, Pakistan and India. Borders outlined in color with a key found in the lower-right quadrant. The whole is rendered in finely engraved detail exhibiting throughout the fine craftsmanship of the Perthes firm.