1865 Spruner Map of the World After the Battle of Corupedi 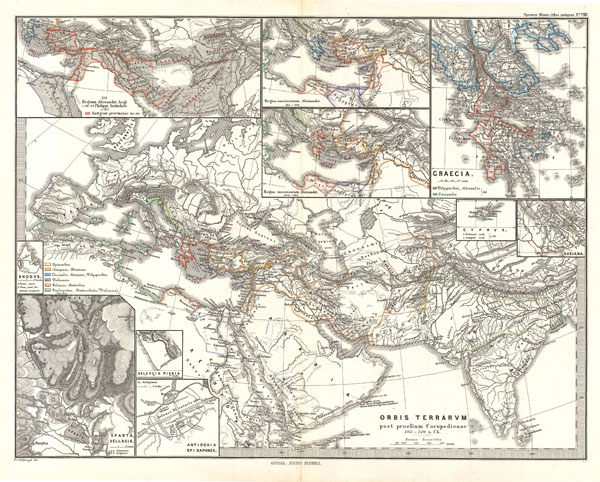 1865 Spruner Map of the World After the Battle of Corupedi

This is Karl von Spruner's 1865 map, Orbis Terrarum post proelium Corupediense, or The World after the Battle of Corupedium. The Battle of Corupedium (also called Corupedion) is the name of the last battle of the Diadochi, the rival successors to Alexander the Great. It was fought, in 281 BC between the armies of Lysimachus and Seleucus I Nicator. This map depicts the known world at this time, from Spain in Europe at the western most point, to India in the far-east. Spruner also includes a number of detailed insets, including Greece, Cyrpus and Susiana, as well as depictions of kingdoms succeeding Alexander the Great. The lower-right quadrant shows Rhodus, Sparta, Seleucia Pieria and Antiochia. Map labels important cities, rivers, mountain ranges and other minor topographical detail. Territories and countries outlined in color. The whole is rendered in finely engraved detail exhibiting throughout the fine craftsmanship of the Perthes firm.