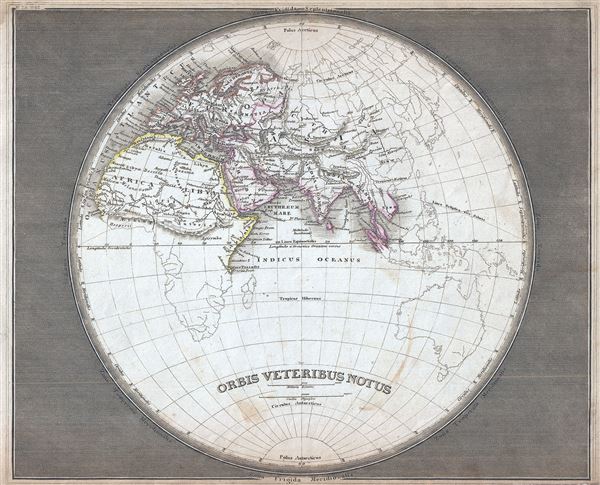 This is an uncommon and attractive 1852 map of the Ancient World, including Asia, Europe and Africa. By Joseph Meyer. The map shows the Ancient World during the time of the Ancient Roman Empire from the Atlantic Ocean to Siam in Asia and from the Indian Ocean to the North Sea. All of Europe, Arabia, part of Asia including the Indian Subcontinent and the northern part of Africa are detailed with outline color. A more contemporary geography in ghosted in beyond the colored outlines to give readers better context. Various ancient cities, rivers, mountains and other topographical details are marked.

This map was issued as plate no. 82 in Meyer's Zeitung Atlas. Although all the maps in this atlas are not individually dated, the title page and maps were often updated while the imprint with the date was not, causing confusion to the exact date for some of the maps. Moreover some maps in the atlas were taped in at a later date as an update to the atlas. We have dated the maps in this collection to the best of our ability.