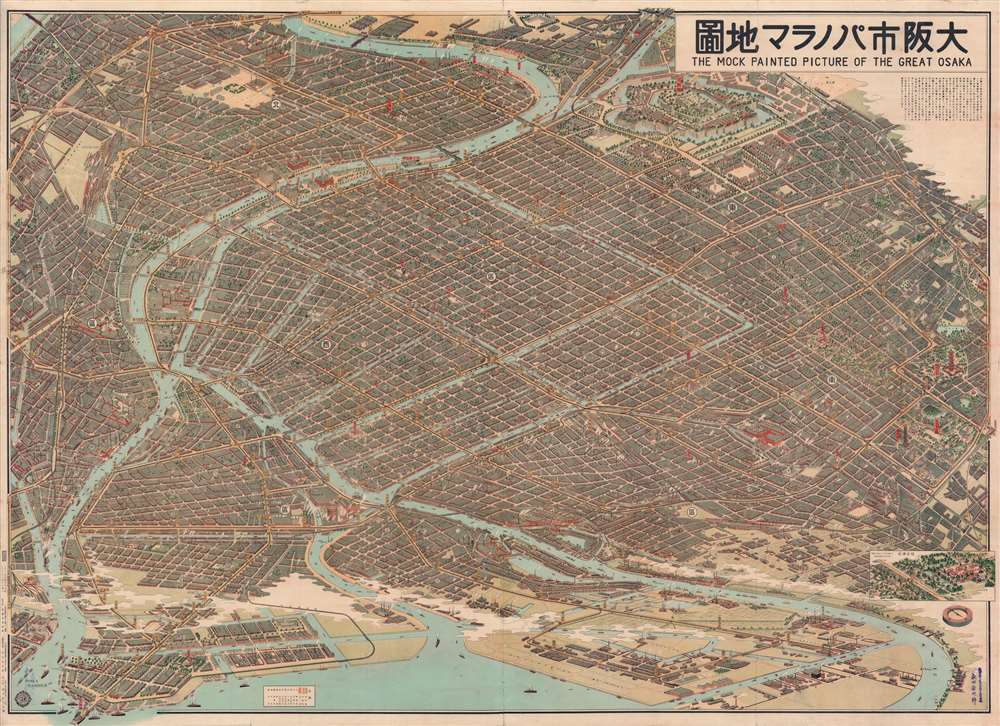 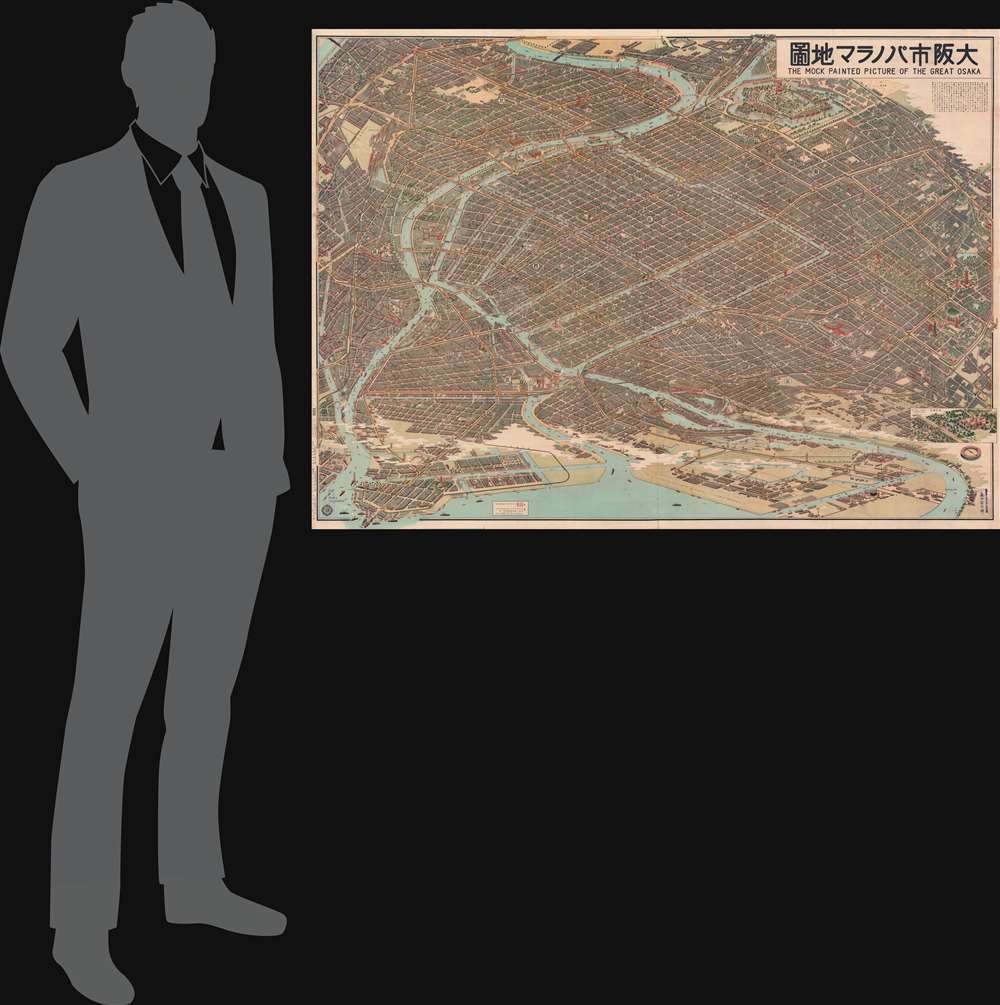 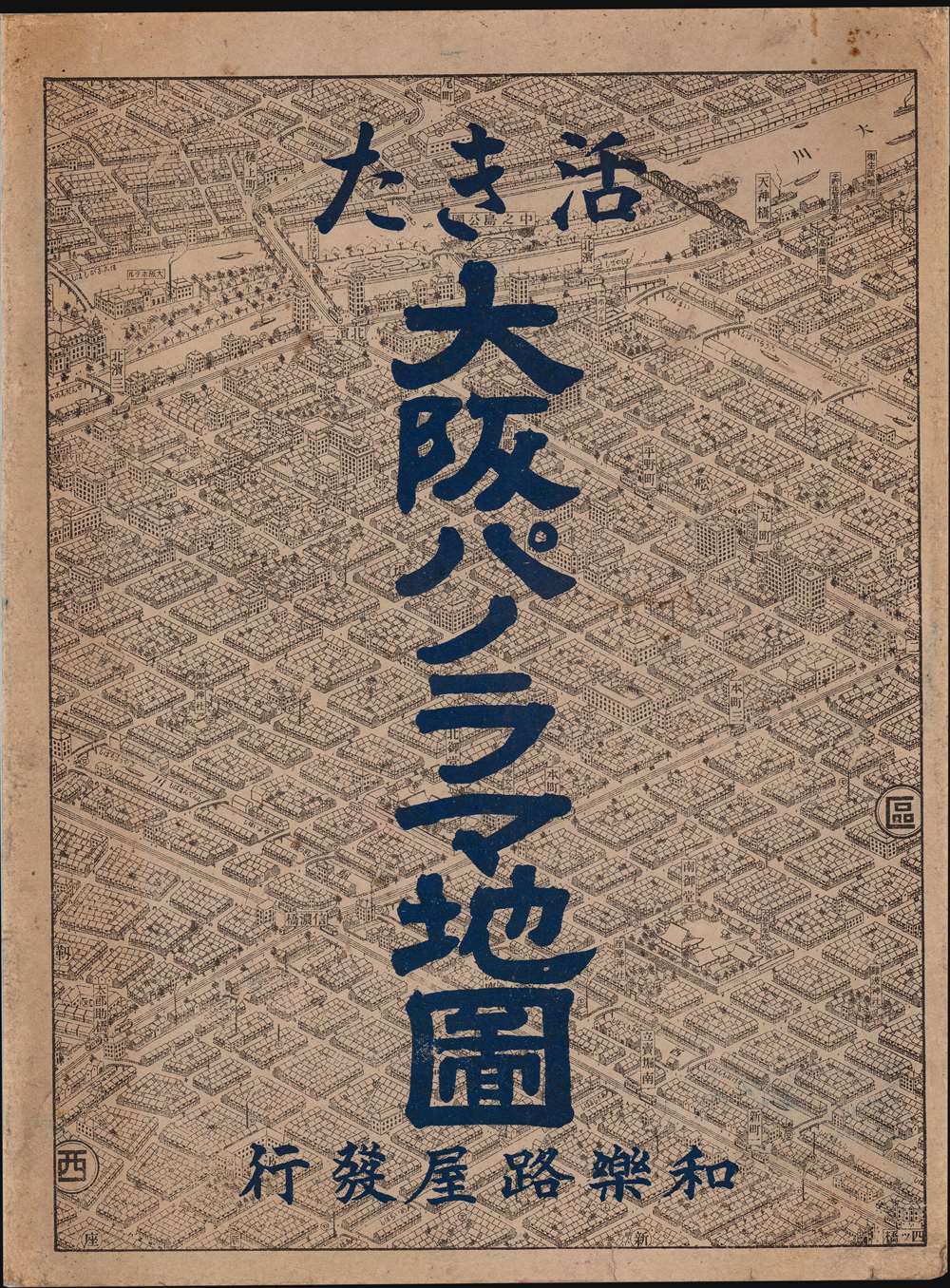 Outstanding view of Osaka during an industrial boom.
$1,200.00

A beautifully detailed 1923 or Taisho 12 birds' eye view of Osaka, Japan from the vantage point of Osaka Bay, oriented towards the northwest. The level of detail is so meticulous that individual pedestrians are discernible. The map labels major landmarks such as the Osaka Station (upper-left), Osaka Castle (upper-right), and the Sumiyosi (or Sumiyoshi) Shrine, shown as an inset at bottom-right as it is outside the frame. It also notes the location of temples, pagodas, parks, streetcar stations, major bridges, schools, government offices, police stations, firehouses, post offices, bathhouses, theaters, entertainment halls (寄席), markets, and dining halls, all of which are named within color-coded boxes or marked with one of the symbols indicated in the legend. The characters in the large white circles signify city districts, and those in the small white circles signify neighborhoods. Given the title on the slipcase, Panoramic Map of Lively Osaka City, the information provided, and the description at top-right (under the title), this map would have been useful for both visitors and locals. Among the few post-publication annotations are a purple stamp at the far bottom-right with the name and address of the original owner, who looks to have been a resident of Osaka's Takatsu (高津) neighborhood. The owner has circled the Osaka Chamber of Commerce (商業會議所) towards the left-center of the map in pencil, and a small tower and cluster of buildings on the edge of the Takatsu and Uemachi (上町) neighborhoods.

One noticeable feature is the network of waterways, canals, and bridges, which has led to Osaka being dubbed 'the Venice of Japan' and the 'City of Water.' Many of Osaka's canals and bridges date to the Edo period, when the city thrived on the rice trade. After World War II, many old bridges were reinforced or replaced with new construction at the same location and retaining the same name. Osaka Castle (大阪城), featured prominently at top-right, was first built by the warlord and unifier of Japan, Toyotomi Hideyoshi (1537 - 1598). The castle was besieged and eventually taken by Tokugawa forces in the early seventeenth century, and then reconstructed and elaborated to the form it takes today. The castle was damaged by bombing during World War II but rebuilt as a museum.

When this map was issued, Osaka was booming. Public and private investment during the Meiji period transformed Osaka into a hub for both light and heavy manufacturing. The growing city attracted migrants from throughout Kansai and beyond, including a large number of Koreans, who often came unwillingly or were lured into exploitative work. They settled in Tsuruhashi (鶴橋) at the far top-right and many stayed after Korea gained independence in 1945; Tsuruhashi remains the largest Korean neighborhood in Japan. The preponderance of streetcars, factories, and parks underscores Osaka's bustling energy. One location of particular interest is Shinsekai Luna Park (新世界ルナパーク) at the center-right, an amusement park named after a similar operation in Tokyo. The park was connected to the Eiffel Tower-esque Tsūtenkaku (通天閣) by an ariel tramway, visible here (the original tower was damaged in the 1940s and replaced in the 1950s with a somewhat similar tower). Just above (northeast) of the tower on the map is the Tennōji Park (天王寺公園), home to a botanical garden, a zoo, a civic museum, a fine arts museum, a sports hall, and halls for martial arts and sumo wrestling. Unfortunately, Osaka's industrial development made the city a target for repeated American bombing raids during World War II. Although the layout of the city is basically the same today, most of the buildings seen on this map have been replaced by postwar construction.

This map was printed on December 28, 1923 (Taisho 12), and distributed on January 5,1924 (Taisho 13) by the Warajiya Publishing Co., Ltd., (和楽路屋). The publisher is listed as Kusaka Warajiya (日下わらじ屋), the printer as Kusaka Ibei (日下伊兵衛, possibly Warajiya's son or some other relation), and the author is listed as Masajirō Minobe (美濃部政治郎), possibly an employee of Kusaka Warajiya. There is also a seal in the bottom-left corner of Nitto Printing Co. Ltd. (日東印刷株式會社). There have been recent reissues of this map, but originals from 1923 are rare, especially outside of Japan. In the United States, it is held only by UC-Berkeley and the University of Chicago. Rare to the market.

Warajiya Publishing Co., Ltd., (和楽路屋; 1872 - 2002) later styled as ワラヂヤ出版株式会社 was an Osaka-based publisher that produced many maps of Japan, particularly the Kansai region where Osaka is located. The company seems to be named after the given name of the founder, Kusaka Warajiya (日下わらじ屋). They were well-known for their railway tourist maps of Japan in 1930s. The firm filed for bankruptcy on October 7, 2002. Learn More...