1853 Wyld Map of Turkey in Asia, the Balkans, and the Ottoman Empire 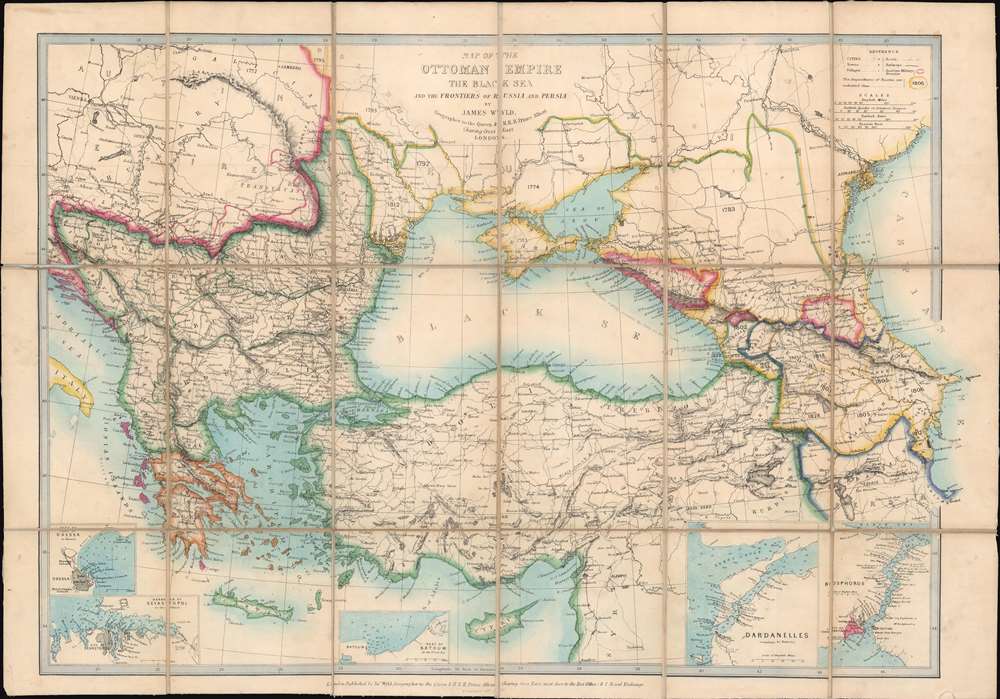 1853 Wyld Map of Turkey in Asia, the Balkans, and the Ottoman Empire

Published less than a month after the outbreak of the Crimean War.

This is an 1853 James Wyld map of Turkey, the Balkans, and the Ottoman Empire at the outbreak of the Crimean War. Published less than a month after the beginning of the war, the map depicts the region from Vienna and the Adriatic Sea to the Caspian Sea and from Russia and Eastern Europe to Cyprus and Syria. Although the genesis of the Crimean War is unclear, one of the factors that led to the war was Russian expansion around the Black Sea. Here, Wyld highlights five regions to the north and east of the Black Sea that Russia gained between 1774 and 1812, including Crimea (still being fought over to this day) and Bessarabia. A printed notation in the eastern Black Sea reads, 'the Russians merely possess the Forts on this Coast.' A close reading of this infers that the Russians only hold the region's defenses, but do not have the loyalty of its people. An intriguing assertion, coming from a British source. Insets along the bottom border focus on some of the region's strategically important areas, including the Bosporus, the Dardanelles, and the Black Sea ports of Odessa, Sevastopol, and Batoum.

The Crimean War, with an alliance of the Ottoman Empire, Britain, France, and Sardinia on one side of the conflict and the Russian Empire on the other, lasted from October 1853 until February 1856. The root cause of the war has never been fully understood. The stated impetus for hostilities was the rights of Christians in the Holy Land, with the Catholics being supported by the French and the Greek Orthodox Church, gaining the support of the Russians. Other factors also included the gradual decline of the Ottoman Empire and British and French concerns about Russian gains in the region at the cost of the Ottomans.

Now, public opinion at home, where discontent at the seemingly wasted effort and expense of sending armies to the Balkans, exerted an influence on the alliance. This outcry led to the planning and execution of an invasion of the Crimean Peninsula in September and a siege of the Russian naval port of Sevastopol, their primary naval base in the Black Sea, which lasted for eleven months. Russia finally sued for peace in March 1856, and in the Treaty of Paris the ended the war Russia lost its Black Sea ports, Wallachia and Moldavia gained a modicum of independence, and Christians in the Holy Land were given a degree of equality.

This map was created and published by James Wyld and bears a copyright date of November 9th, 1853, less than a month after the beginning of the Crimean War. It is well represented in institutional collections.

Very good. Dissected and mounted on original linen, which has been reinforced in places. Folds into professionally restored original binder.