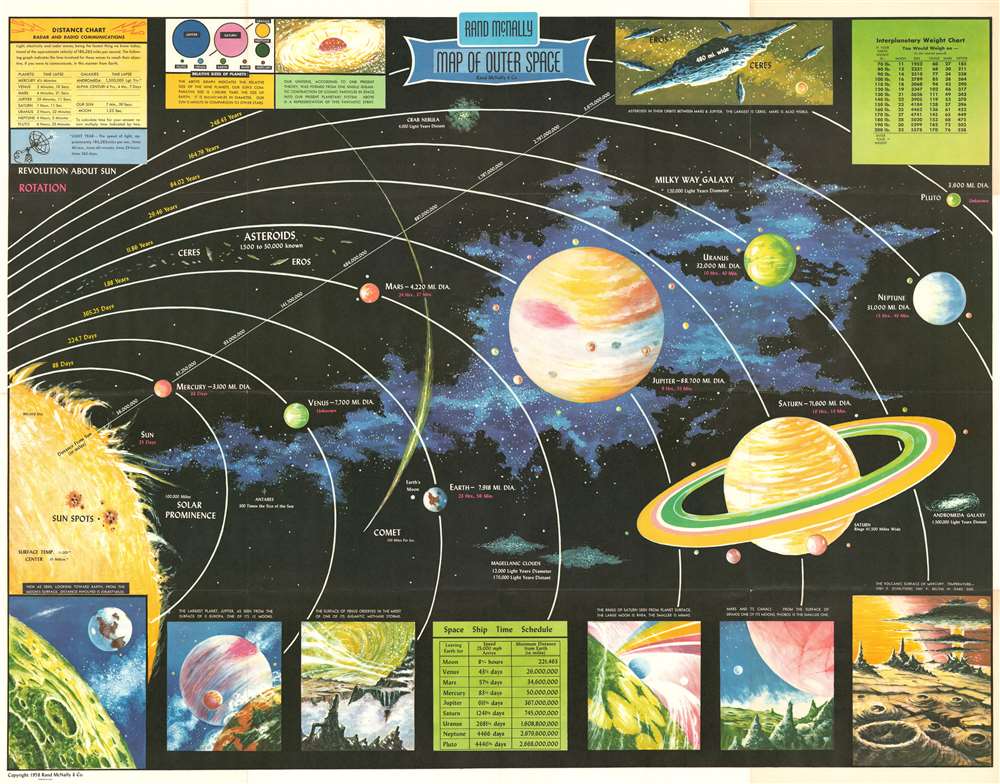 This is a 1958 Rand McNally map of the Solar System. The map focuses on the Solar system and illustrates all eight planets (at that point there were nine). Moons orbit Earth, Mars, Jupiter, Saturn, Uranus, and Neptune, each of which is situated in its own orbit around the Sun. The distance in miles between the orbits is provided, as is the distance traveled in each orbit, the length of time spent in one orbit (given in Earth years), and the amount of time it takes for each planet to complete one revolution. Both Ceres and Eros are illustrated in the Asteroid Belt between Mars and Jupiter, and a note states that between 1,500 and 50,000 asteroids are known to exist within the belt. Other celestial formations are noted as well, including Antares, Magellanic clouds, the Crab Nebula, and the Andromeda Galaxy. Text boxes and inset views create a frame around the center map, and provide information concerning interplanetary and intergalactic distances, the relative size of the planes in the Solar System, an artist's rendering of Eros and Ceres, a chart of interplanetary weights, and artist renderings of a volcanic eruption on Mercury, canals on Mars, the Rings of Saturn, methane storms on Venus, the Jupiter's Great Red Spot, and Earth as seen from the Moon.

This map was created and published by Rand McNally and Company in 1958. At least three different states of this map were published with the same copyright date (1958). There were no major changes in the content of the map between states, the only change being a slight change to the map's title.

Very good. Light wear along original fold lines. Exhibits some toning. Blank on verso. Accompanied by original mailer.
Looking for a high-resolution scan of this?