1835 Hall Map of the Pacific Ocean, Australia, and Polynesia 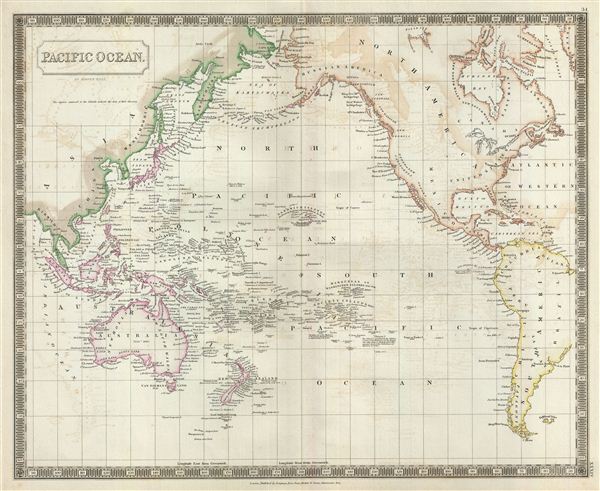 1835 Hall Map of the Pacific Ocean, Australia, and Polynesia

This is a beautiful map of the Pacific Ocean, Australia, and Polynesia from Sidney Hall's extremely scarce 1835 New General Atlas. Centered on the Sandwich or Hawaiian Islands, it depicts the entirety of the Pacific Basin along with portions of the surrounding continents. The map covers from the Bering Strait south as far as Cape Horn and from Burma (Myanmar) east as far as the western coast of Greenland. Although the interiors of the continents remain blank, the coastal regions are highly detailed. Numerous islands of Polynesia, Melanesia and Micronesia are noted along with the years of their discovery. Hawaii's Karakakoa Bay (Kealakekua Bay), bears the note 'here Captain Cook was killed on Sunday, Feb 14, 1779.' Hawaii is here identified by the older English spelling 'O-Why-Hee.'

The map offers copious notations throughout, such as 'Christian, one of the Mutineers of the Bounty attempted to form a settlement here in 1789,' and on Pitcairn's Island, 'This Island is inhabited by the Children of some of the Mutineers of the Bounty, who after going to Otaheite, where there married some of the Otaheitans, settled here in 1790.' Clearly though occurring nearly 60 years prior, the romantic adventures of Fletcher Christian, who lead the Bounty mutiny against Captain Bligh, remained very much on the minds of the British.