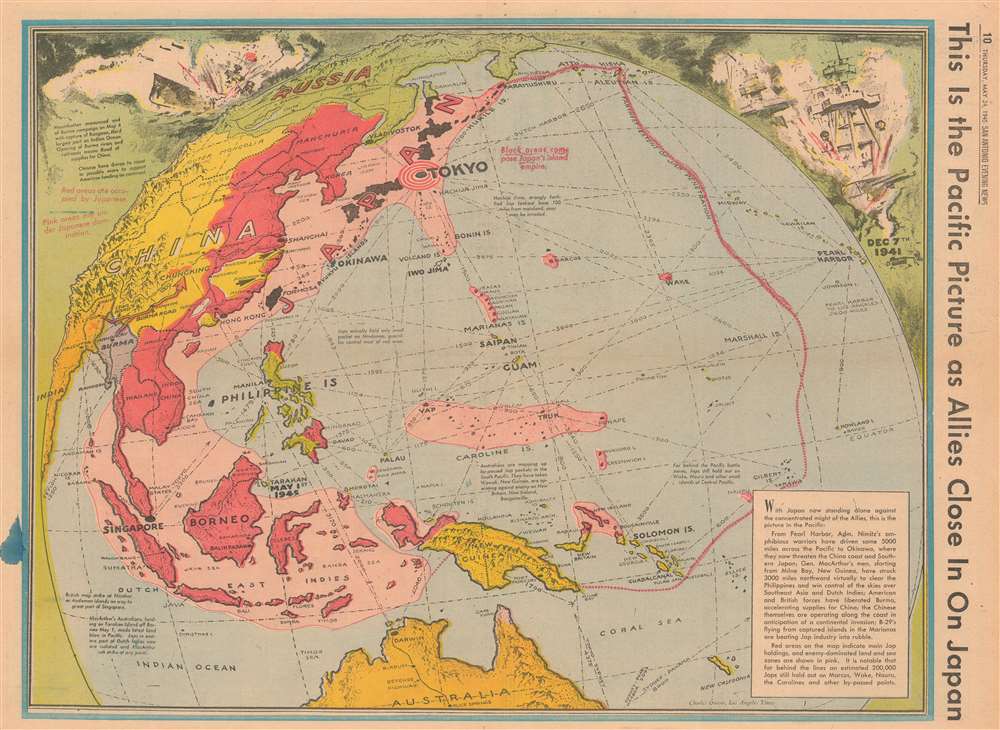 Depicts the current situation in the Pacific and includes a vivid vignette of the Japanese attack on Pearl Harbor.

This is a 1945 Charles Owens map of the Pacific highlighting the current state of affairs in the Pacific War only a couple weeks after Allied victory in Europe. In a style reminiscent of Richard Edes Harrison, the map depicts the region from China and India to Hawaii and from the Aleutian Islands and Russia to Australia. Owens uses color highly effectively to convey the areas of Japanese invasion (dark red), and influence (pink) to provide the viewer with immediate understanding of just how much territory the Japanese still control, even after victory was achieved in Europe.

Gains have been made in the Pacific, particularly with the liberation of Burma in Southeast Asia, in the Solomon Islands, Marshall Islands, Mariana Islands, and the Philippines. Advances by the Chinese near the coast are also highlighted, and in the text box in the lower right corner the fact that American B-29s from the Marianas are bombing Japan renders evident the successes the Allies have won in this theater. The dashed pink line, encircling most of the western Pacific and representing the farthest reaches of Japanese expansion, also makes it quite evident how far the Japanese have been pushed back in three and a half years of war. A vignette in the upper right corner brilliantly illustrates the Japanese attack on Pearl Harbor on December 7, 1941, depicting what appears to be the explosion of the magazine on the USS Arizona and reminding Americans viewing this map in their daily newspaper why their young men were still fighting in the Pacific. A vignette in the opposite corner illustrates American planes attacking and sinking a Japanese battleship.

One of the military strategies unique to the Pacific War was the ‘leapfrogging’ or island hopping’ strategy adopted by the Allies. Strongly supported by General Douglas MacArthur, this strategy called for bypassing certain heavily fortified islands in the Pacific in favor of more important targets. The ‘leapfrogged’ islands would then be cut off from resupply by the advancing Allied forces and would ‘wither on the vine’. Very few maps of the Pacific War illustrate this strategy as well as this one. By using the pink to shade where Japanese forces were still present, and the yellow to show the American and Australian advance through the South and Central Pacific, ‘leapfrogged’ islands, such as Truk in the Caroline Islands, and Marcus and Wake Islands as is pointed out on the map, are easily recognized.

This map was created by Charles Owens of the Los Angeles Times and published by the San Antonio Evening News on Thursday, May 24, 1945.

Good. Newsprint. Closed one inch margin tear professionally repaired on verso. Blank on verso.
Looking for a high-resolution scan of this?