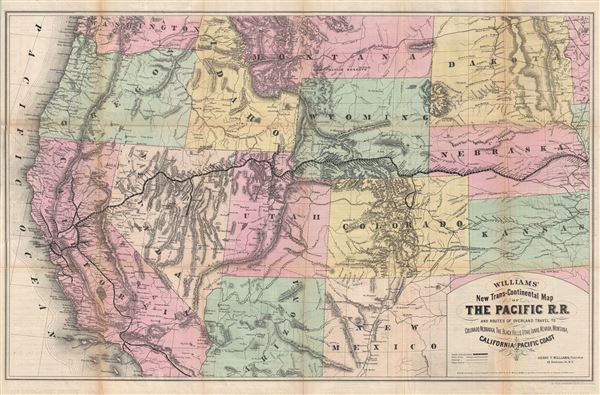 A tribute to the Pacific Railroad and the conquest of the American West.

A scarce and exceptionally attractive first edition example of Henry Williams' 1876 map of the Pacific Railroad. Centered on the line of the Pacific Railroad as it travels westward across the continent to California, this map covers from Omaha, to San Francisco and from Olympia, Washington to San Diego, California. States, topography, towns and cities, American Indian tribes, are boldly defined in vibrant color and fine engraving.

The development of the transcontinental railroad made practical, for the first time, tourist travel to the west. Williams was among the first publishers to capitalize on this trade with his introduction of Williams' Pacific Tourist, which contained this map. Williams' map presents a dramatic overview of the railroad route westward. Incorporating information from government surveys, Williams' emphasizes the tribulations overcome by the railroad route by juxtaposing it with the rugged topography of the west. In some cases he even takes liberties to emphasize the extreme nature of the topography, rendering some mountain ranges, such as the Wasatch, in a manner more dramatic than factual. Indeed, to the railroad, and the tourist enjoying it, the rugged mountainous terrain of the American west is presented a source of wondrous amusement. Williams, in his Pacific Touristdescribes the adventure thus,

In no part of the world is travel made so easy and comfortable as on the Pacific Railroad. To travelers from the East it is a constant delight, and to ladies and families it is accompanied with absolutely no fatigue or discomfort. One lies at home in the Palace car with as much true enjoyment as in the home drawing room … On the second day out [of Omaha], the traveler is fast ascending the high plains and summits of the Rocky Mountains … He is alive with enjoyment, and yet can scarcely tell why … Ah It is this keen, beautiful, refreshing, oxygenated, invigorating, toning, beautiful enlivening mountain air which is giving him the glow of nature, and quickening him to greater appreciation of this grand impressive country.

In addition to the main line of the Pacific Railroad, Williams also identifies secondary tributary lines, such as the narrow gauge railway from Palisade to the mining town of Eureka, Nevada. Other tributary lines of note include the Denver Pacific line extending into Colorado, the Franklin Idaho Line, and various extensions through California, most focusing on the San Francisco - Sacramento region. The railroad was essential to the development of the American mining industry in the west, providing much needed supplies to mining enclaves in Colorado, Nevada, and California. Although his primary focus is on the Pacific Railroad, other lines of note including those still under construction such as the Southern Pacific and Northern Pacific, as well as various smaller rail networks inching their way through Colorado, New Mexico, and Kansas.

This map was prepared and published by Henry Williams for the 1876 first edition of his Pacific Tourist. The map was printed by the A. M. Photolithographic Company of New York using the Osborne Process. Williams himself maintained offices at 46 Beekman Street. There are several subsequent editions, but all are scarce, none more than this the first.