1852 Meyer Map of Palestine, Israel or the Holy Land 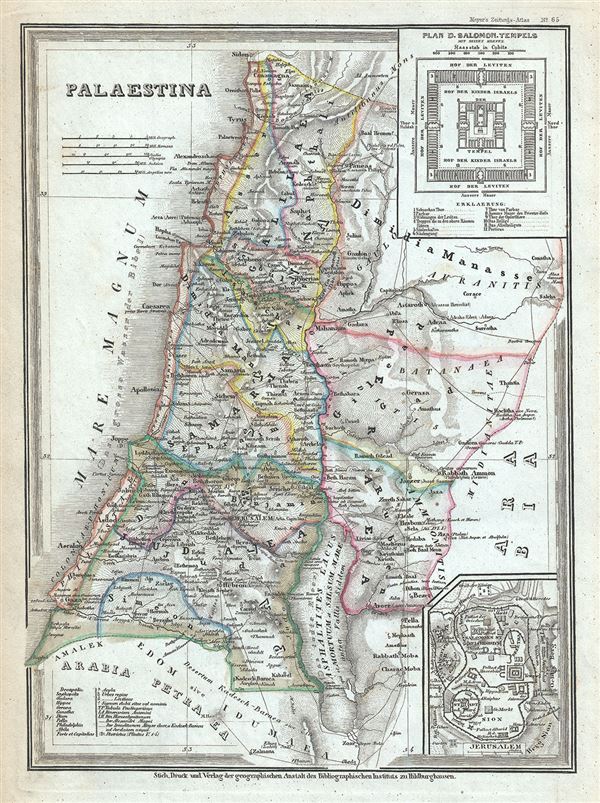 1852 Meyer Map of Palestine, Israel or the Holy Land

This is an attractive 1852 map of Palestine, Israel or the Holy Land, by Joseph Meyer. This map is a curious combination of a contemporary and a historic map and includes the modern day nations of Israel, Palestine and Lebanon, as well as parts of adjacent Syria and Jordan. The color coding details the region as it may have appeared in Biblical times, with the lands claimed by the Tribes of Israel noted, from the north these are Asher, Naphtali, Zebulon, Issachar, Manasseh, Ephraim, Benjamin, Dan, Judah, Simeon, Reuben, Gad and Manasseh beyond Jordan. The Ten Cities of the Roman Decapollis are also identified in the lower left quadrant. It marks both ancient and contemporary place names as well as the locations of Biblical events and ancient sites. An inset map of Jerusalem is included in the lower right quadrant while a plan of Solomon's Temple is featured in the top right quadrant.

This map was issued as plate no. 65 in Meyer's Zeitung Atlas. Although all the maps in this atlas are not individually dated, the title page and maps were often updated while the imprint with the date was not, causing confusion to the exact date for some of the maps. Moreover some maps in the atlas were taped in at a later date as an update to the atlas. We have dated the maps in this collection to the best of our ability.